The Demise and Rebirth of American Third Parties
Poised for Political Revival? 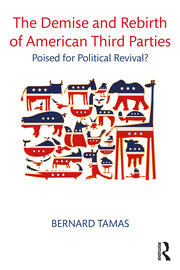 The Demise and Rebirth of American Third Parties: Poised for Political Revival?

Virtually all academic books on American third parties in the last half-century assume that they have largely disappeared. This book challenges that orthodoxy by explaining the (temporary) decline of third parties, demonstrating through the latest evidence that they are enjoying a resurgence, and arguing that they are likely to once again play a significant role in American politics. The book is based on a wealth of data, including district-level results from US House of Representatives elections, state-level election laws after the Civil War, and recent district-level election results from Australia, Canada, India, and the United Kingdom.

Chapter 4 The Prohibition of Fusion

Chapter 7 The Decline and Rise of Political Polarization

Chapter 8 The Evolution of Party Resources

Conclusion: A Reemergence of Third Parties?

Bernard Tamas is Assistant Professor of Political Science at Valdosta State University. He was a Postdoctoral Fellow at Harvard University, Fulbright Scholar to Central European University in Budapest, Hungary, Visiting Research Scholar at Columbia University, and software developer at Princeton University. He has also taught at Williams College and Brandeis University. Tamas is the author or co-author of four books.

Praise for The Demise and Rebirth of American Third Parties

Backed by stunning scholarship, Bernard Tamas boldly encounters and deconstructs one of the prize shibboleths of political science: that the United States is a two-party system, full stop. Sensitive both to the reigning arguments that assume permanent major-party hegemony and to hangdog efforts to showcase third parties, Tamas focuses on two critical factors that herald a new era of third party growth: rising polarization and the media revolution that gives third parties hitherto shut out by the monopolistic major parties a strong voice that can be heard by millions of people. He makes a fresh and compelling case.

If you agree with the conventional wisdom that third parties are doomed to remain relegated to the margins, read this book. You will be in for a surprise. Bernard Tamas's highly innovative, mixed-method analysis makes a convincing case for the resurgence of third-party dynamics that is crucial for understanding American politics in the age of Trump.

, University of Hawai'i-Manoa and RMIT University

Combining a deep grasp of the theoretical literature with sure-handed statistical analysis, Bernard Tamas persuasively argues that the time has arrived for innovation and disruption by new third parties. As the nation declines into the nadir of Trumpism, we must hope that Tamas provides one alternative path that leads us toward a revival of democracy in the United States.

Through impressive historical research and insightful observation of contemporary politics, this book persuasively argues that third parties will increasingly benefit from technological change and elite polarization. As in our past, third parties may significantly affect national party politics in our future.

With sound scholarship and a provocative argument, The Demise and Rebirth of American Third Parties addresses a question that many Americans will find compelling in the face of increasingly negative partisan attitudes.

We like to teach students that the two-party system flows neatly out of our voting rules. Bernard Tamas shows how third parties emerge, in spite of those, when the party system becomes unresponsive. Scholars of parties both major and minor have much to gain from Tamas’ polarization thesis.

, Democracy Fund An enlightening contribution on third parties, this book delivers a serious challenge to the conventional wisdom that minor parties are perpetually on the margins of the American political system. Scholars and students looking for a comprehensive understanding of the fluctuating performance of third parties in modern American history must read this book.