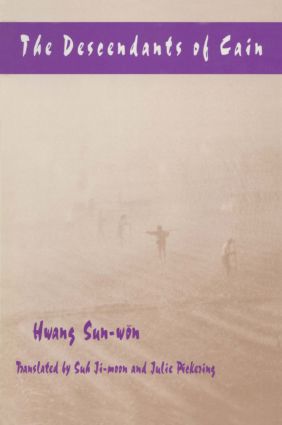 The Descendants of Cain

Hwang Sun-won, perhaps the most beloved and respected Korean writer of the 20th century, based this extraordinary novel on his own experiences in his North Korean home village between the end of World War II and the eve of the Korean War when Korea had been divided into North and South by its two "liberators" - the United States and the Soviet Union. In this story the Soviet-backed communist party, using the promise of land reform, sets people at each other's throat. Portrayed here is an entire community caught in the political and social firestorm that brings out the selfishness, cruelty and ignorance of simple people, but also shows their loyalty and nobility. Compelling here, too, is a heroine who represents the "eternally feminine" for all Korean men, and the setting, the harsh political, psychic and physical landscape of rural postwar North Korea rarely glimpsed by the outside world. Hwang Sun-won is an artist of consummate delicacy and subtlety, and his writing is marked by keen psychological insight and steely asceticism. While three collections of his short stories have appeared in Hong Kong and the West, "The Descendants of Cain" is the first English translation of a Hwang Sun-won novel.

Robert Roberts' The House Servant's Directory, first published in 1827 and the standard for household management for decades afterward, is remarkable for several reasons: It is one of the first books written by an African American and issued by a commercial press, and it was written while Roberts (ca. 1780-1860) was in the employ of Christopher Gore (1758-1827), a former senator from and governor of Massachusetts (and ancestor of the novelist Gore Vidal). Gore Place, where Roberts worked from 1825 to 1827, is one of the grandest neoclassical mansions built in America. Not only was the extraordinary set of recommendations that Roberts made about relations between servants and their masters unique for its time, but his many recipes for cleaning furniture and clothing and for purchasing, preparing, and serving food and drink for small and large dinners are also still useful today. As portrayed in Graham Hodges' introduction, Roberts' own story is a unique window into the work habits and thoughts of America's domestic workers and into antebellum African American politics. Of particular note is Roberts' contribution to the emergence of new self-perceptions of black manliness. Written at a time when male Americans in general were reconsidering the construction of masculinity, Roberts' advice to his fellow servants fostered black dignity for work that few felt merited respect, and his counsel to employers on proper treatment of their servants insisted on their humanity and respect for their skills.