The Design and Implementation of the RT-Thread Operating System 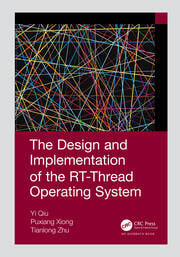 The Design and Implementation of the RT-Thread Operating System

Since the release of V0.01 in 2006, to the present V4.0 version, RT-Thread has developed a reputation among developers for its open source strategy. RT-Thread has gained a large following among members of the embedded open source community in China with hundreds of thousands of enthusiasts. RT-Thread is widely used in energy, automotive, medical, consumer electronics, among other applications, making it a mature and stable open source embedded operating system.

The purpose of RT-Thread RTOS Design and Implementation is to create an easy learning curve for mastering RT-Thread, so that more developers can participate in the development of RT-Thread and work together to create an open source, tiny, and beautiful Internet of Things operating system. The book’s first part introduces the RT-Thread kernel and starts with an overview of RT-Thread before covering thread management, clock management, inter-thread synchronization, inter-thread communication, memory management, and interrupt management. The second part begins with RT-Thread kernel porting and explains how to port RT-Thread to a hardware board to run it. The second part also introduces RT-Thread components and discusses the Env development environment, FinSH console, device management, and network framework. Additional topics covered include:

Each chapter features code samples, as well as helpful tables and graphs, so you can practice as you learn as well as perform your own experiments.

Qiu Yi is a co-founder of Shanghai Real-Thread Electronic Technology Co., Ltd. He has been working on the development of the RT-Thread open-source operating system since 2006. RT-Thread has now been widely used in many industries, such as energy, vehicle, medical, consumer electronics, and more. It is a mature and stable open-source embedded operating system with a large installed capacity.

Xiong Puxiang is a founder and CEO of Shanghai Real-Thread Electronic Technology Co., Ltd. He created the RT-Thread open-source operating system in 2006 and has led engineers in the design and develop of the RT-Thread operating system kernel by integrating object-oriented design concepts and developing many mature and stable software components such as file system, command line, and graphical user interface.

Zhu Tianlong is the CTO of Shanghai Real-Thread Electronic Technology Co., Ltd. He has more than 10 years of RTOS development experience and has taken charge of the RT-Thread R&D team, which is committed to researching and developing cutting-edge technology. Also, he is an embedded open-source geek, sharing such open-source software as easylogger, easyflash, and cmbacktrace.