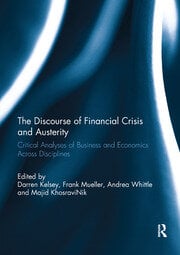 The Discourse of Financial Crisis and Austerity: Critical analyses of business and economics across disciplines

This book demonstrates the importance of understanding how political rhetoric, financial reporting and media coverage of austerity in transnational contexts is significant to the communicative, social and economic environments in which we live. It considers how aspects of moral storytelling, language, representation and ideology operate through societies in financial crisis and through governments that impose austerity programmes on public spending. Whilst many of the debates covered here are concerned with UK economic policy and British social contexts, the contributions also consider examples from other countries that reflect similar concerns on the ideological operations of austerity and financial discourse. The multiple discursive contexts of austerity demonstrate the breadth of social concerns and conflicts that have developed in societies and institutions following the global economic crisis of 2008. Through its interdisciplinary focus on this topic, this book provides an important contribution across multiple subject areas, with shared interests in critical and analytical approaches to discourse, power and language in social contexts reflecting the healthy collaborative scope of critical discourse studies as a field of research. This book was originally published as a special issue of Critical Discourse Studies.

2. Accounting for the banking crisis: repertoires of agency and structure Andrea Whittle and Frank Mueller

3. Protesting Too Much: Alastair Darling’s constructions after the Financial Crash Catherine Walsh

5. How Malthusian ideology crept into the newsroom: British tabloids and the coverage of the ‘underclass’ Steven Harkins and Jairo Lugo-Ocando

is Professor of Strategy and Organisation at Newcastle University Business School, UK. His overall research focus is on understanding organisational change as a discursive, political and strategic project under conditions of neo-liberalism and managerialism.

is Professor of Management and Organization Studies at Newcastle University Business School, UK. Her research is driven by a passion for understanding the role of language in business and management settings, and is informed by theories and methodologies from the fields of discourse analysis, narrative, discursive psychology, ethnography, ethnomethodology, and conversation analysis.

is a Lecturer in Media and Discourse Studies at Newcastle University, UK. His research interests lie in theory, methodology and application of critical discourse analysis in a range of topics including the intersection of discourse and (national/ethnic/group) identity. He is a co-convenor of the Newcastle Critical Discourse Group.