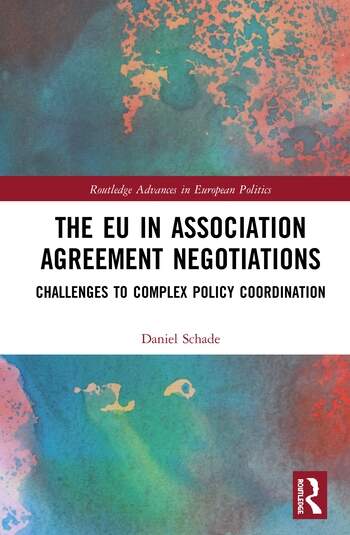 Through its focus on EU Association Agreement negotiations, this book goes beyond the study of traditional EU trade negotiations and puts the spotlight on the increasing number of negotiations where trade relations are discussed alongside political ones. This setting makes both the negotiations themselves and the definition of the EU’s positions more complicated, raising the question as to what ultimately determines the EU’s behaviour in such complex negotiations spanning multiple of the EU’s policy areas.

Offering a generalizable analytical model to study such complex EU international negotiations, the book illuminates the preferences and interactions between individual parts of the EU’s foreign affairs bureaucracy, and those between the lead actors, the Directorate General for Trade, and the European External Action Service (EEAS), in particular. In doing so, it demonstrates the utility of adapting the concept of bureaucratic politics from Foreign Policy Analysis (FPA) to the EU’s foreign policy decision-making apparatus across different stages of EU international negotiations. It also discusses how the institutional changes of the Treaty of Lisbon have altered the institutional set-up of the EU’s foreign affairs bureaucracy and thereby changed the foundations of the EU’s bureaucratic politics. Finally, the book finds that the EU’s behaviour in these negotiations is ultimately shaped, on the one hand, by the presence of diverging positions between its institutional actors, and the difficulty to bridge them through policy coordination mechanisms, on the other. Empirically, it explores these dynamics by considering the EU’s Association Agreement negotiations on the Latin American continent over the last twenty years before demonstrating the analytical model’s utility in the context of the EU’s negotiations with Ukraine and Japan.

This book will be of key interest to scholars, students, and practitioners in EU foreign affairs/external relations, EU public administration and public policy, EU trade policy, and more broadly to Foreign Policy Analysis and International Relations.

Daniel Schade is a Postdoctoral Researcher and Lecturer at the Otto von Guericke University Magdeburg, Germany, and a Visiting Lecturer at Sciences Po Paris, France.