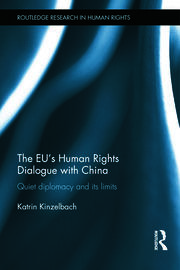 The EU's Human Rights Dialogue with China: Quiet Diplomacy and its Limits

The European Union uses a confidential, institutionalized Dialogue to raise human rights concerns with China, but little is publicly known about its set-up, its substance, its development over time and its impact.

This book provides the first detailed reconstruction and assessment of the EU’s responses to human rights violations in China from 1995 to the present day. Using classified documents in the EU’s historical archives and interviews with diplomats, officials and human rights experts in Europe, China and the United States, Kinzelbach lifts the veil of secrecy on the EU-China Human Rights Dialogue and provides a rare insight into how the European Union and China conduct quiet diplomacy on human rights. The book reconstructs the evolution of the Dialogue and the EU’s internal debate on the merits of quiet diplomacy, and draws comparisons with the approach of other actors, notably that of the United States. In doing so, the EU’s relative impact is concluded to be tenuous if not counter-productive. The book also chronicles and analyzes numerous human rights concerns that were raised in the period, ranging from structural issues to individual cases.

This ground-breaking, in-depth case study will be of interest to students and scholars of international politics, human rights, international law, EU politics, especially the EU’s Common Foreign and Security Policy, and Chinese politics.

Katrin Kinzelbach is associate director of the Global Public Policy Institute in Berlin and visiting professor at the School of Public Policy, Central European University in Budapest.

This is not just the best study of Western human rights policy toward China and of informal human rights dialogue in print; it is also one of the best microanalyses of a sensitive contemporary policy issue that I have ever read.

Dr Kinzelbach has performed a valuable service to all those interested in human rights diplomacy. Not only does she provide vital, new, information on the form and content of the EU-China human rights dialogues, but she also reaches sobering and well-substantiated conclusions that confirm that these dialogues do not fulfil their ostensible purpose of improving China's human rights record. She also suggests it is time to seek alternative approaches in this important policy sphere. This book represents a major contribution to our understanding of EU-China relations and of how human rights diplomacy is conducted in the contemporary era.

Human Rights has been one of the most contentious and vexed issues in the relationship between the EU and China, marked by deep differences and the lack of an agreed common framework. In this book, Katrin Kinzelbach gives a meticulous critique of the ups and downs of the various dialogue rounds in this area between the two. She outlines the history of the talks, the drivers behind them, and their few successes and many failures. But she also looks deeper into the reasons behind why the dialogue has proved so difficult, and what this shows about both parties. Dr Kinzelbach is to be congratulated on producing such a clear, succinct and balanced treatment of an area which is dominated by much contention and misunderstanding. This stands as the definitive study of this hugely important subject.

Chinese diplomats have skilfully channeled much of the West’s effort to influence their country’s human rights record into formal government to government dialogues, whose proceedings are confidential. Kinzelbach has dug up information that reveals what happens behind the screen of EU foreign policy making on this important issue. She shows with admirable clarity how Chinese officials have taken advantage of European political divisions and organizational confusion to gain the upper hand over the scheduling, agendas, procedural rules, and rhetorical atmosphere of these meetings. In fascinating detail she portrays the frustration this has produced among European diplomats. Although the dialogues have been less and less productive for real human rights advances, both sides persist in holding them. For the EU they serve as a fig leaf for the lack of more effective policies. A model of objectivity and clarity, the study promotes a sophisticated understanding of UN, EU, and Chinese diplomatic goals and methods. It bears important lessons for all who seek to influence a rising China.

This brilliant study of Katrin Kinzelbach is the most thorough and well-informed analysis of almost 20 years of the EU's human rights dialogue with China. The book provides a rare and detailed insight into how the European Union conducts quiet human rights diplomacy. Her conclusions are devastating for the EU's approach towards China: The dialogue is found to be ineffective and even counter-productive. It yielded no meaningful results and should, therefore, either be discontinued or linked to specific political and economic conditions.

This meticulously researched book examines the European Union's human rights dialogue with China between 1995 and 2010. Those who seek a short answer to the question of whether the EU's efforts have paid off could read the author's last few words in her conclusion chapter, which characterize the dialogue as "impotent." For those who have studied China's human rights diplomacy, the book confirms what they already know or suspect about the nature and effect of the discreet European doplomatic engagement with Bejing in the human rights area.

-- Ming Wan is Professor of Government and Politics and Director of the Political Science division at the School of Policy, Goverment and International Affairs at George Mason University, located in Fairfax, Virginia.