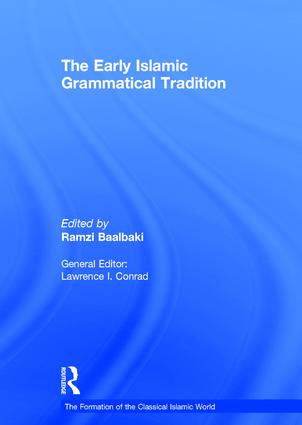 The last decades have witnessed a major resurgence of interest in the Arabic grammatical tradition. Many of the issues on which previous scholarship focused - for example, foreign influences on the beginnings of grammatical activity, and the existence of grammatical "schools" - have been revisited, and new areas of research have been opened up, particularly in relation to terminology, the analytical methods of the grammarians, and the interrelatedness between grammar and other fields such as the study of the Qur'an, exegesis and logic. As a result, not only has the centrality of the Arabic grammatical tradition to Arab culture as a whole become an established fact, but also the fields of general and historical linguistics have finally come to realize the importance of Arabic grammar as one of the major linguistic traditions of the world. The sixteen studies included in this volume have been chosen to highlight the themes which occupy modern scholarship and the problems which face it; while the introductory essay analyses these themes within the wider context of early Islamic activity in philology as well as related areas of religious studies and philosophy.

’All in all, this book is a very welcome addition to the tools available for acquainting oneself with the medieval Arab scholars' view of their language, and one for which sincere gratitude is owed to its editor.’ Journal of Islamic Studies ’Baalbaki provides a masterly account of the problems connected with the search for the origins of Arabic grammar and of the pitfalls of any dogmatic approach taken in this search.’ Historiographia Linguistica ’In keeping with the underlying philosophy of the series, the volume under review is a remarkable eye opener into the state of current episteme on Arabic grammar, and will indubitably serve as a reliable launching pad for further investigations…’ Asiatische Studien

Contents: General editor's preface; Introduction.The Beginnings of Arabic Grammar: The origins of Arabic grammar, M.G. Carter; The logic of Ibn al-Muqaffa` and the origins of Arabic grammar, Gérard Troupeau; Grammar and exegesis: the origins of Kufan grammar and the Tafsir Muqatil, Kees Versteegh; On the Greek influence on Arabic grammar, Frithiof Rundgren; Schacht's theory in the light of recent discoveries concerning the origins of Arabic grammar, Rafael Talmon; Indian influence on early Arab phonetics - or coincidence?, Vivien Law. Analytical Methods of the Grammarians: Language and logic in classical Islam, Muhsin Mahdi; Aspects of debate and explanation among Arab grammarians, Georges Bohas; The relation between nahw and balaga: a comparative study of the methods of Sibawayhi and Gurgani, Ramzi Baalbaki; The fundamental principles of the Arab grammarians' theory of `amal, Aryeh Levin; The notion of `illa in Arabic linguistic thinking, Yasir Suleiman. Major Themes in Grammatical Study: The syntactic basis of Arabic word classification, Jonathan Owens; Speech consists entirely of noun, verb and particle:elaboration and discussion of the theory of parts of speech in the Arabic grammatical tradition, Jean-Patrick Guillaume; Noun, substantive and adjective according to Arab grammarians, Werner Diem; Subject and predicate in Arab grammatical tradition, Gideon Goldenberg; Relationships between linguistics and other sciences in Arabo-Islamic society, Pierre Larcher. Index.

Ramzi Baalbaki is Professor of Arabic at the American University of Beirut, the Lebanon. He is also the author of Grammarians and Grammatical Theory in the Medieval Arabic Tradition (Ashgate/Variorum, 2004).