The Early Reformation in Germany
Between Secular Impact and Radical Vision 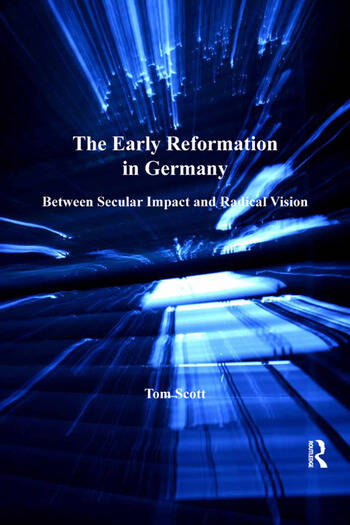 The Early Reformation in Germany: Between Secular Impact and Radical Vision

Over the last twenty years research on the Reformation in Germany has shifted both chronologically and thematically toward an interest in the ’long’ or ’delayed’ Reformations, and the structure and operation of the Holy Roman Empire. Whilst this focus has resulted in many fascinating new insights, it has also led to the relative neglect of the early Reformation movement. Put together with the explicit purpose of encouraging scholars to reengage with the early ’storm years’ of the German Reformation, this collection of eleven essays by Tom Scott, explores several issues in the historiography of the early Reformation which have not been adequately addressed. The debate over the nature and function of anticlericalism remains unresolved; the mainsprings of iconoclasm are still imperfectly understood; the ideological role of evangelical doctrines in stimulating and legitimising popular rebellion - above all in the German Peasants’ War - remains contentious, while the once uniform view of Anabaptism has given way to a recognition of the plurality and diversity of religious radicalism. Equally, there are questions which, initially broached, have then been sidelined with undue haste: the failure of Reforming movements in certain German cities, or the perception of what constituted heresy in the eyes of the Reformers themselves, and not least, the part played by women in the spread of evangelical doctrines. Consisting of seven essays previously published in scholarly journals and edited volumes, together with three new chapters and an historical afterword, Scott’s volume serves as a timely reminder of the importance of the early decades of the sixteenth century. By reopening seemingly closed issues and by revisiting neglected topics the volume contributes to a more nuanced understanding of what the Reformation in Germany entailed.

'For scholars and students of the Reformations, the quick and the protracted, the radical and the English, Tom Scott’s elegant and thought-provoking essays offer a comforting reminder that our subject yet offers questions unanswered, problems unresolved, and topics unexplored.' - Renaissance and Reformation

'This book provides ten well-written and well-researched essays refocusing scholarly attention on the early Reformation in Germany, encouraging reflection on how historians approach the period, and pointing toward new avenues of research. ... Overall there is much to be gained by reading this collection, particularly for the challenge it poses to scholars of the early Reformation to reexamine existing interpretations and to recognize the need for continued research.' - Sixteenth Century Journal

'This collection is a cohesive set of articles with three new essays to fill out his broad array of research on the early Reformation.' - Lutheran Quarterly

'Scott is to be commended and thanked for calling scholars back to the study of the early Reformation and for beginning to show the way with such a fine collection of essays.' - German History

'Scott’s ability to reveal new insights into older questions using known sources is impressive. His essays not only remind us of the debates of the 1970s and 1980s, but he pushes them forward in creative ways. As such, his book should be foundational reading for anyone riding the wave of renewed interest in the early Reformation.' - Church History

'Scott’s willingness to confound categories and bring together essays on Luther with those seen as radical reformers is a welcome contribution to the task of reconstructing the early ’Wildwuchs’ of the reformation. Scott’s breadth of focus is the real strength of this volume; he cannot answer every question he poses, but, in asking them in the first place, he also challenges scholars to reconsider seriously the complexity of the early German reformation.' - English Historica