The East
Buddhists, Hindus and the Sons of Heaven 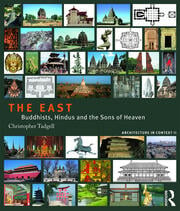 The East: Buddhists, Hindus and the Sons of Heaven

The East, the second in a series of seven books that describe and illustrate the seminal architectural traditions of the world, is a survey of unparalleled range and depth. The journey starts on the Indian subcontinent with the Vedic and native traditions of the 2nd millennium BCE, modified by the changing demands of worship to produce the characteristic forms of Buddhist and Hindu temples in all their spatial and sculptural variety – which also helped to shape palaces and even towns in a complex line of development.

The tradition in its exported forms – in Java, Cambodia, Burma and Thailand among other territories – developed in stupendous buildings, producing monuments as fabulous as Angkor Wat and the Shwe-dagon pagoda in Rangoon.

In the second part of the book, the long but conservative traditions of China, Korea and Japan and their spheres of influence are examined, a story of absorption and transformation centred on the walled enclosures of China and the Japanese predilection for informality and artful simplicity.

Not simply a profusely illustrated catalogue of buildings, the book also provides their political, technological, social and cultural contexts. It functions equally well as a detailed and comprehensive narrative, as a collection of the great buildings of the world, and as an archive of themes across time and place.