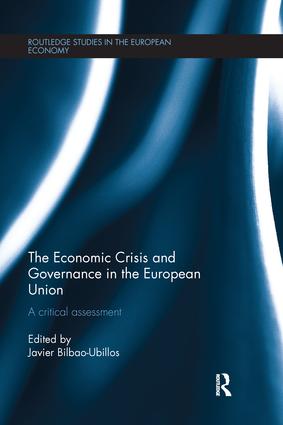 The Economic Crisis and Governance in the European Union

This book explores the way in which the financial crisis that began in the US spread to the economy of the European Union. It takes a critical look at the measures adopted by EU institutions in response to that crisis, seeking to explain the rationale behind them, their context, their development and why different exit strategies were not adopted. In doing this, the book makes comparisons with the measures adopted by institutions in the US and the UK.

As the crisis has shown that the financial supervision frameworks prevailing in 2007 were not fully able to deal with the largest financial crisis in history, this volume also reviews the proposals that have been designed to reform the supervisory architecture in financial services in the EU.

The book concludes that the EU member states under most pressure from financial markets do suffer from intrinsic problems, but that the economic effects of the crisis have been exacerbated by shortcomings in economic governance within the EU.

This work will be highly relevant to policy makers and scholars looking at EU integration, finance and market regulation.

'This book, the 28th volume in the publisher's "Studies in the European Economy" series, examines the responses the European Union adopted to counter the financial crisis that erupted in 2008…This work will be highly relevant to policy makers and scholars looking at EU integration, finance, and market regulation. Summing Up: Recommended. Researchers, professionals, practitioners.' -- R. Grossman, Wesleyan University, for CHOICE

1. Introduction Javier Bilbao-Ubillos Part I: Economic Crisis in the European Union: Roots and structural weaknesses 2. Great Recession and Economic Policy: Roots and Consequences Xosé Carlos Arias and Antón Costas 3. Financial supervision reform in the EU: A comparison with the UK and the USA Isabel Argimon, María Luisa Leyva and Cristina Luna 4. The Eurozone Challenging Institutional Framework for Economic Policy Ricardo Aláez and Carlos Gil 5. Why so slow? The crisis and the structural weaknesses of the EU Marco Ricceri Part II: Praxis of European Governance Facing the Economic Crisis: A critical assessment 6. A Critical Look at European Governance of the Economic Crisis: The rationale behind exit strategies Javier Bilbao-Ubillos 7. The Myth of Expansive Austerity: Questioning European macroeconomic policy during the crisis and its aftermath Rafael Muñoz del Bustillo 8. Debt Crisis and New Economic Governance: A conservative alternative to the European Economic Government Francisco Rodríguez-Ortiz 9. Austerity and Financial Instability Emilio Ontiveros and Angel Berges

Javier Bilbao-Ubillos is Senior Lecturer in the Department of Applied Economics at the University of the Basque Country, Spain.

Routledge Studies in the European Economy

Routledge Studies in the European Economy is our home for cutting-edge, upper-level scholarly studies and edited collections. Featuring compact and well researched volumes of 150 to 300 pages, the series provides a range of content considering the European economy alongside history, politics, cultural studies, agriculture, education, globalisation, and other subjects, titles are characterized by dynamic interventions into established subjects and innovative studies on emerging topics.