The Economic Geography of Air Transportation
Space, Time, and the Freedom of the Sky 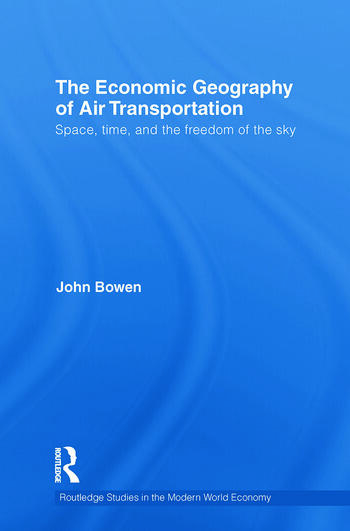 The Economic Geography of Air Transportation: Space, Time, and the Freedom of the Sky

Like the railroad and the automobile, the airliner has changed the very geography of the societies it serves. Fundamentally, air transportation has helped redefine the scale of human geography by dramatically reducing the cost of distance, both in terms of time and money. The result is what the author terms the ‘airborne world’, meaning all those places dependent upon and transformed by relatively inexpensive air transportation.

The Economic Geography of Air Transportation answers three key questions: how did air transportation develop in the century after the Wright Brothers, what does it mean to live in an airborne world, and what is the future of aviation in this century? Examples are drawn from throughout the world. In particular, ample consideration is given to the situation in developing countries, where air transportation is growing rapidly and where, to a considerable degree, the future of the airborne world will be determined.

The book weaves together the technological development of aviation, the competition among aircraft manufacturers and their stables of airliners, the deregulation and privatization of the airline industry, the articulation of air passenger and air cargo services in everyday life, and the challenges and controversies surrounding airports. It will be of particular interest to students and researchers in air transport history, the geography of the airline industry, air transport technological development, competition in the commercial aircraft industry, airport development, geography and economics. It will also be useful to professionals working in the airline, airport, and aircraft manufacturing industries.

1. Introduction  Part 1: Getting Airborne: The Development of the Airliner and Commercial Air Transportation  2. Jetting Towards a Smaller World: Early Commercial Aviation  3. Far and Wide: Wide-body Jetliners and the Growth of the Global Airline Industry  4. Space-Makers and Pace-Setters: Boeing and Airbus  Part 2: Open Skies and a Crowd of Competitors  5. Letting Go: The Liberalization of the Airline Industry  6. Survival of the Fittest: Network Carriers in the Global Airline Industry  7. A World Taking Wing: Low Cost Carriers and the Ascent of the Many  Part 3: Life Aloft and on the Ground in the Airborne World  8.People on the Move at 1,000 Kilometers per Hour  9. The High Ways of Trade  10. Points of Departure: Airports in the Airborne World  11. Dangers Hidden in the Air: The Broader Costs of Commercial Aviation  Part 4: Beyond the Horizon  12. Coming Back Down to Earth? The Cloudy Future of Air Transportation