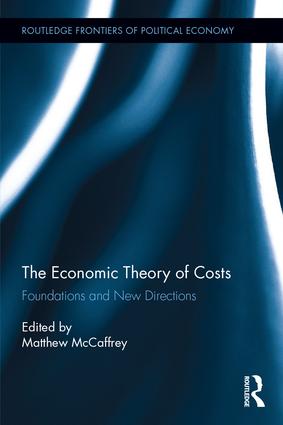 The Economic Theory of Costs

The theory of costs is a cornerstone of economic thinking, and figures crucially in the study of human action and society. From the first day of a principles-level course to the most advanced academic literature, costs play a vital role in virtually all behaviors and economic outcomes. How we make choices, why we trade, and how we build institutions and social orders are all problems that can be explained in light of the costs we face.

This volume explores, develops, and critiques the rich literature on costs, examining some of the many ways cost remains relevant in economic theory and practice. The book especially studies costs from the perspective of the Austrian or “causal-realist” approach to economics. The chapters integrate the history of economic thought with contemporary research, finding valuable crossroads between numerous traditions in economics. They examine the role of costs in theories of choice and opportunity costs; demand and income effects; production and distribution; risk and interest rates; uncertainty and production; monopsony; Post-Keynesianism; transaction costs; socialism and management; and social entrepreneurship.

Together, these papers represent an update and restatement of a central element in the economic way of thinking. Each chapter reveals how the Austrian, causalrealist approach to costs can be used to solve an important problem or debate in economics. These chapters are not only useful for students learning these concepts for the first time: they are also valuable for researchers seeking to understand the unique Austrian perspective and those who want to apply it to new problems.

Introduction: "The Economic Theory of Costs in Perspective"

The Evolution of Causal-Realist Production Theory

Chapter 5: "The Myth of the Risk Premium"

Chapter 6: "Time and the Theory of Cost"

Economic Organization, Entrepreneurship, and the Firm

Chapter 10: "The Management Problem of Socialism: Cost at the Expense of Value"

Chapter 11: "Economic Calculation and the Limits of Social Entrepreneurship"

is Assistant Professor of Enterprise in the Alliance Manchester Business School, University of Manchester, UK. His research focuses on entrepreneurial decision making, the role of entrepreneurship in social and economic development, and the institutional conditions in which enterprise thrives.