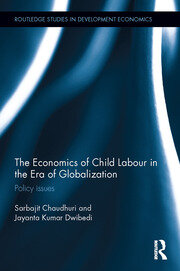 The Economics of Child Labour in the Era of Globalization: Policy issues

Children in poor countries are subjected to exploitation characterized by low wages and long hours of work, as well as by unclean, unhygienic and unsafe working and living conditions, and, more importantly, by deprivation from education, all of which hampers their physical and mental development. Child labour is a complex issue, and clearly it has no simple solution. This book sheds some understanding of its root causes.

The book attempts to delve into many of the important theoretical aspects of child labour and suggests policies that could indeed be useful in dealing with the problem under diverse situations using alternative multisector general equilibrium models.

1 A survey of literature on child labour

2 Derivation of supply functions of child labour from household behaviour

4 Why do composite policies sometimes fail?

5 Is the reduction of poverty a necessity?

7 Child labour, human capital formation and the possibility of failure of incentive-based schemes

He has also authored books titled Foreign Direct Investment in Developing Countries: A Theoretical Evaluation (2014), Revisiting the Informal Sector: A General Equilibrium Approach (2010) and Some Aspects of Agricultural Credit in a Developing Economy (2004). He has served on the editorial boards of many journals. For his work, he was made an honorary member of the Canadian Economic Association in 2006. His areas of interest include development economics, international trade, labour economics, agricultural economics and applied microeconomics.

Jayanta Kumar Dwibedi is Associate Professor of Economics at Brahmananda Keshab Chandra College, Kolkata, India. He obtained his PhD from the University of Calcutta, India, in 2008, working under the supervision of Professor Sarbajit Chaudhuri. With his specialization in trade and development and labour economics, he has published a number of research articles in many renowned international and national journals such as International Review of Economics and Finance, The Manchester School, Bulletin of Economic Research, Research in Economics, Review of Development Economics and Economic and Political Weekly. His current research interests include development economics, labour economics and issues related to public finance and public policy. Recently, he has completed two collaborative studies (with CTRPFP, CSSSC) for the Central Finance Commission, India, and the State Finance Commission of West Bengal, India.