The Economics of Military Spending
A Marxist Perspective 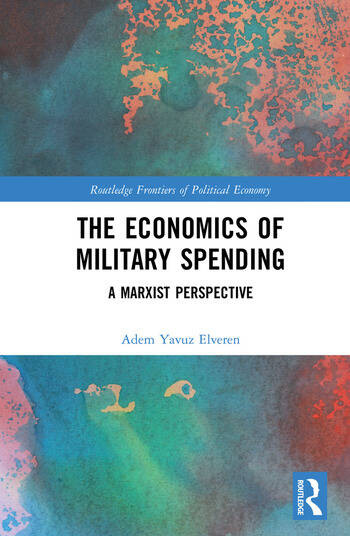 The Economics of Military Spending: A Marxist Perspective

The Economics of Military Spending offers a comprehensive analysis of the effect of military expenditures on the economy. It is the first book to provide both a theoretical and an empirical investigation of how military spending affects the profit rate, a key indicator of the health of a capitalist economy.

Offering a Marxist perspective and an emphasis on quantitative analysis, The Economics of Military Spending will be of great interest to students and scholars of defence and peace economics, as well as Marxist economics.

3 Military Keynesianism and the military-industrial complex

7 Analysis of the nexus of military expenditure and profit: country cases

Adem Yavuz Elveren is Associate Professor at Fitchburg State University, U.S.A. His research focuses on gender and social security and the effect of military spending on the economy.

"In this fine essay on the economic effects of military spending, Adem Elveren presents a wide-ranging review of Marxist, liberal and neoclassical perspectives alongside an extensive econometric investigation. This work should invigorate debate on the role of the military, a dangerous topic that has received too little critical attention in recent years.", James K. Galbraith, The University of Texas at Austin, USA

"This important book offers a sophisticated analysis of the determinants of military spending and its economic impact. Adem Elveren provides a comprehensive review of the extensive theoretical and empirical literature, with a particular emphasis on Marxist debates, before turning to a rigorous original econometric analysis of its impact on the rate of profit.", Simon Clarke, Emeritus Professor of Sociology, University of Warwick, UK

"The book is a welcome addition to the defence economics literature. It addresses a theme that has not received the attention it deserves in the relevant literature. It demonstrates how Marxist analysis can be applied to contemporary issues and offer much needed and valuable insights from a non-mainstream perspective. An essential read for students and scholars working on defence economics.", Christos Kollias, University of Thessaly, Greece

"This timely book provides a valuable overview of the effect of military spending on economic growth and the degree to which this results from its impact on profits. It is an impressive piece of work that combines modern empirical analysis with heterodox, particularly Marxian, theory to great effect.", J Paul Dunne, Professor of Economics, University of Cape Town, South Africa

"In breadth and depth of coverage of its subject matter, and contribution in its own right, this volume is second to none for the student of military expenditure and its causes and effects. The expert will be able to gain from it all, whilst the general reader will find much from which to learn.", Ben Fine, Emeritus Professor of Economics, School of Oriental and African Studies, University of London, UK

"Adem Elveren has filled an important gap in our knowledge of military spending. Offering a comprehensive overview of the principal attempts to explain how it affects both economic performance and welfare, it subjects these theories to rigorous quantitative testing. Especially novel is the integration of Galbraith’s astute analyses of the Military Industrial Complex with Marxist work, and a long-overdue study of how military spending impacts the profit rate.", Alan Freeman, University of Manitoba, Canada