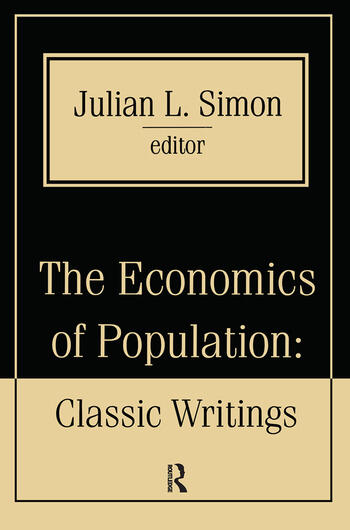 The economics of population has a long and controversial history as well as an exciting present. Vociferous popular debate, public policy, and population economics have unduly influenced one another: public debate and policy affect the erection of economists' conclusions just as the results of economists' studies influence debate and popular thought. The words and theories of John Maynard Keynes, Thomas R. Malthus, John Stuart Mill, and Friedrich Engels come to mind immediately. However, many writings on population economics had little or no influence on public thought at the time they were written, although they may be seen as "correct" in light of modern developments. In fact, many of the ideas contained in these writings were publicly debated but then ignored for a long time, reappearing much later or reinvented independently.

The Economics of Population, edited by Julian L. Simon, traces the history of population economics. This is a century-spanning collection of essays from foremost influential economic theorists, arranged to illustrate thought development and its numerous reversals. The first section includes essays from Joseph J. Spengler, John Graunt, William Petty, Thomas R. Malthus, William Godwin, and David Ricardo. Theorists such as Alexander Everett, William Peterson, Simon Gray, Henry C. Carey, John Stuart Mill, Friedrich Engels, Henry George, and Charles Fourier are the subject of the volume's second section. Finally, Simon covers the effect of population density and cities on productivity, and the effect of density on agricultural practices and natural resources. Essays from this section include John Maynard Keynes' "Is Britain Overpopulated?" and "The Economic Consequences of Peace" as well as selections from Lionel Robbins, George Simmel, and Alvin H. Hansen.

Simon's long-term focus reflects the evolution of population movements. He does not restrict himself to writings that have been important in the historical chain of intellectual influence. Rather, he guides us to key works which shed light on the intellectual history of population economics. Simon includes some essays that, while greatly influential, can also be seen as fundamentally wrong in light of later work. As such, The Economics of Population will be of great value to political economists, sociologists of knowledge, and historians of ideas.