The Economics of Public Enterprise 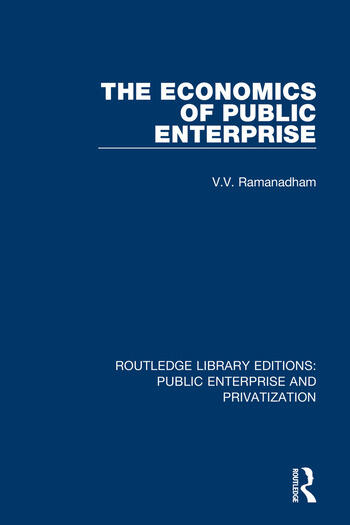 The Economics of Public Enterprise

Public enterprises have played a central part in the development of all mixed economies in the post-war period, but they are now in a crisis phase. Privatisation has pushed back the level of public enterprise almost throughout the world. Where public enterprises remain, they are being brought under significant reforms.

Originally published in 1991, this book presents a comprehensive critique of public enterprise, analysing why its performance has fallen far short of expectations. Part one is concerned with the establishment of public enterprises: the case for them, the circumstances in which they emerged, the extra enterprise objectives attached to them, and the decisions on their investment feasibility and capital structure.

Part two looks at the working of public enterprises: the state of their financial performance, the peculiarities of pricing, the determination of targets which they should meet, the continuous monitoring and evaluation of their operations.

Macro concerns are the focus of Part three. Among the issues addressed are the level of indirect taxation and subsidisation implicit in the pricing structures of public enterprises, the links between public enterprise and the public exchequer and the implications of their operations for distributional equity. In Part four the extent to which privatisation can solve the problems of public enterprise is discussed. The book ends with some broad conclusions on the future of public enterprise. Throughout, the approach is analytical, but the arguments are supported by extensive examples from both developed and developing economies.