The Economy as a Polity: The Political Constitution of Contemporary Capitalism 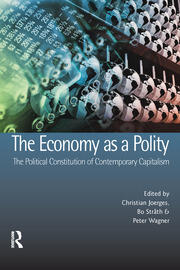 The Economy as a Polity: The Political Constitution of Contemporary Capitalism

The debate about so-called economic globalization has reached a new phase. The hegemony of neo-liberal thinking has ended, in the face of both the increased and increasingly effective resistance to the social consequences of neo-liberal market-making - rising inequality and insecurity throughout the world - and the visibly dysfunctional effects of lack of regulation - currency and stock market crashes, among others. Thus, the story about 'the rise and fall of market society', which was first told in these terms by Karl Polanyi sixty years ago, is about to receive a new chapter.

In this light, this volume offers a novel perspective on the interaction between states and markets. In contrast to much of current theoretical wisdom, we hold, with Polanyi, that markets cannot even be consistently thought of as self-regulating. Markets are always constituted by framework conditions that cannot be set by the markets themselves. The range and scope of market rules requires some agreement, or at least acceptance, for economic exchange to be working at all; in democratic societies, these rules are at least theoretically always subject to political debate and decision. To put the issue in theoretical terms: even the most pure version of economic liberalism always entails at the same time a political philosophy. This volume, thus, proposes to understand contemporary capitalism by regarding the economy as a polity, as an arrangement that is always constituted by some collective agreements about its mode of operation.

Such theoretical position on its own, though, is insufficient to explain the workings of capitalism once and for all. Historical experiences with capitalism have led to transformations that require new angles of analysis. It is in the nature of the struggles over the embedding of markets that their outcomes are subject to historical contingency and cannot be completely known beforehand. Beyond a review of the theoretical tools at hand, therefore, the analysis of the contemporary constellation of capitalism, also requires an understanding of its recent transformations. This is the second task to which this volume is devoted - through analyses of the current state of regulation of labour and money and through investigations of the historical development and novel forms of the mode of embedding markets. While focusing on the renewal of the analysis of contemporary capitalism, the volume also points to fruitful directions of institutional or policy change and provides perspectives for a much-needed political renewal, with a particular focus on the European Union as a novel polity embedding the European economy.

Part I - The Economy as a Polity: Renewing a Debate: Theorising the Economy as a Polity: The Point of View of Contemporary Economics; The Problmatique of Economic Modernity: Critical Theory, Political Philosophy and the Analysis of Capitalism; Civilizational Perspectives on Capitalism; One World Or Three?: Globalization and the Future of Welfare Capitalism. Part II - Capitalism, co-ordination, Constitution: Capitalism, Coordination, and Economic Change: Lessons from the French Political Economy; Between Constitutional Democracy and Society: reflections on the Legal-Historical Evolution of Administrative Governance; The Turn to Governance and the Problmatique of Constitutionalism; The European Social Model and the Constitution-Giving Process in the European Union. Part III - Markets, Mobility, Monetary Regulation: The Basel System of International Monetary relations, 1960-1968; Monetary Regulation and European Economic Policy in Historical Perspective.