The Embodied Analyst
From Freud and Reich to relationality 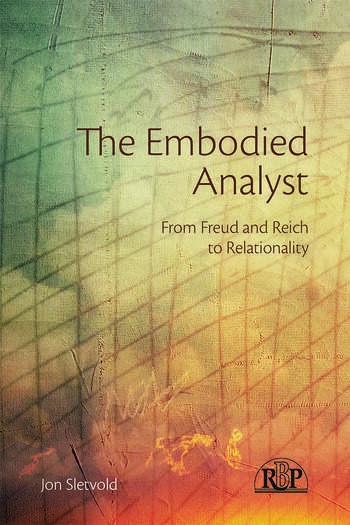 The Embodied Analyst: From Freud and Reich to relationality

The Embodied Analyst brings together the history of embodied analysis found in the work of Freud and Reich and contemporary relational analysis, particularly as influenced by infant research. By integrating the ‘old’ embodied and the ‘new’ relational traditions, the book contributes to a new clinical perspective focusing on form and process rather than content and structure – the ‘how’, rather than the ‘what’ and the ‘why’. This perspective is characterised by a focus on movement, emotional interaction and the therapists own bodily experience in the analytic encounter.

Jon Sletvold presents a user-friendly approach to embodied experience, providing the history, theory, training and practice of embodied experience and expression as a way of expanding clinical attention. Starting with a Spinozan view of the embodied mind, Part One: History of Embodied Psychoanalysis presents an overview of the history of the field in the works of Freud and Reich as well as a look at the Norwegian Character Analytic tradition . Part Two: Conceptual Framework and Clinical Guidelines explains how clinical interaction can be navigated based on the embodied concepts of subjectivity, intersubjectivity and reflexivity. Part Three: Embodied Training and Supervision presents innovative approaches to training in emotional communication inspired by the performing arts. The book ends with a consideration of the embodied analyst in the 21st century consulting room.

Jon Sletvold is a Faculty, Training and Supervising Analyst at the Norwegian Character Analytic Institute. He is former chair of the Psychotherapy Speciality Board of the Norwegian Psychological Association and is co-editor of two previous books.

‘In this lucid, judicious, and important book, Jon Sletvold integrates material from contemporary neuroscience, attachment and infant research, philosophy, and the history of psychoanalysis to give his reader an analyst for the twenty-first century. Through his reading of Freud’s body ego and affect theory, as well as Reich’s character analysis, Sletvold revisits the corporeal foundations of psychoanalytic thought and creates links among ideas that have often been perceived as incompatible. He further contextualizes these theories in light of more recent work on intersubjectivity in various fields and demonstrates their pragmatic importance with illuminating stories from his own work with patients and training analysis. Finally, Sletvold’s consistently undogmatic, intellectually open, and compassionate explication of the implicit and explicit dynamics between analyst and patient is a pleasure to read.’ - Siri Hustvedt

'An invaluable contribution, The Embodied Analyst bridges psychoanalytic cultures and countries, substantially and impressively advancing contemporary attempts to integrate non-verbal and body-based experience in relational psychoanalytic theory and practice. Sletvold enriches the relational literature in his discussion of these dimensions in the work of Freud and his often-excluded disciple, Wilheim Reich. Further enhancement is offered in his discussion of Scandinavian analysts who were influenced by Reich, illuminating the often misunderstood and inaccurately represented historical roots of including the non-verbal dimension in treatment. Using evocative clinical material throughout, Sletvold also offers a model for embodied clinical training and supervision.' - Frances Sommer Anderson, PhD, SEP. Editor, Bodies in Treatment: The Unspoken Dimension (2008)

'The Embodied Analyst is an outstanding contribution to our understanding of the nonverbal and affective aspects of the analytic process. Within the psychoanalytic world, Wilhelm Reich is primarily recognized for the role that his seminal book on character analysis played within the development of the ego psychology tradition. By focusing more broadly, however, on his thinking about embodiment, Sletvold had managed to synthesize a lost aspect of Reich’s legacy with a contemporary relational perspective on transference and countertransference, as well as recent insights into the change process emerging from mother-infant developmental literature. The result of this synthesis is rich in both theoretical and technical yield. It’s also a fascinating and engaging read.' - Jeremy D. Safran, Ph.D. Past-President of the International Association for Relational Psychoanalysis & Psychotherapy and Co-Founder & Co-Chair of The Sandor Ferenczi Center at the New School for Social Research

'Norwegian psychoanalysis has long understood that being human involved living in a body, something that many others have managed to overlook. In this groundbreaking book, Jon Sletvold brings a contemporary reading of the best of Wilhelm Reich’s theories of character analysis to such diverse influences as affect theory, cognitive neuroscience, infancy research and an array of contemporary psychotherapies. He thus weaves a vivid, immediate and scholarly picture of how we live our histories and psychologies through our embodied subjectivity. This book will change every analyst’s practice for the better.' - Stephen Seligman, DMH, Clinical Professor of Psychiatry, Infant-Parent Program, University of California, San Francisco, Joint Editor-in-Chief, Psychoanalytic Dialogues: International Journal of Relational Perspectives, Training and Supervising Analyst, San Francisco Center for Psychoanalysis & Psychoanalytic Institute of Northern California