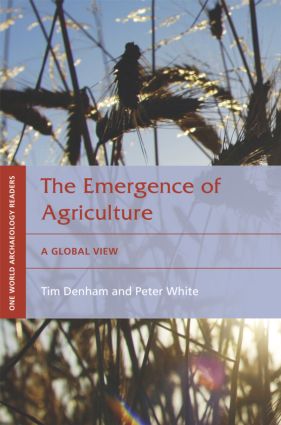 The Emergence of Agriculture

This volume, the first in the One World Archaeology series, is a compendium of key papers by leaders in the field of the emergence of agriculture in different parts of the world. Each is supplemented by a review of developments in the field since its publication.

Contributions cover the better known regions of early and independent agricultural development, such as Southwest Asia and the Americas, as well as lesser known locales, such as Africa and New Guinea. Other contributions examine the dispersal of agricultural practices into a region, such as India and Japan, and how introduced crops became incorporated into pre-existing forms of food production.

This reader is intended for students of the archaeology of agriculture, and will also prove a valuable and handy resource for scholars and researchers in the area.

1. Early Agriculture: Recent Conceptual and Methodological Developments 2. An Evolutionary Continuum of Plant-People Interaction (1989) 3. Darwinism and its Role in the Explanation of Domestication (1989) 4. Non-Affluent Foragers: Resource Availability, Seasonal Shortages, and the Emergence of Agriculture in Panamanian Tropical Forests (1989) 5. The Impact of Maize on Subsistence Systems in South America: An Example from the Jama River Valley, Coastal Ecuador (1999) 6. Cultural Implications of Crop Introductions in Andean Prehistory (1999) 7. Early Plant Cultivation in the Eastern Woodlands of North America (1989) 8. The Dispersal of Domesticated Plants into North-Eastern Japan (1999) 9. The Origins and Development of New Guinea Agriculture (1989) 10. Subsistence Changes in India and Pakistan: The Neolithic and Chalcolithic from the Point of View of Plant use Today (1989) 11. Domestication of the Southwest Asian Neolithic Crop Assemblage of Cereals, Pulses, and Flax: The Evidence from the Living Plants (1989) 12. Agrarian Change and the Beginnings of Cultivation in the Near East: Evidence from Wild Progenitors, Experimental Cultivation and Archaeobotanical Data (1999) 13. The Beginnings of Food Production in Southwestern Kenya (1993)

Tim Denham is a Monash and Australian Postdoctoral Research Fellow in the School of Geography and Environmental Science. His research focuses on early agriculture in New Guinea, with additional interests in environmental archaeology and archaeological theory. He has recently initiated a 6-year project investigating rockshelter and cave sites along a highland-to-lowland transect in a remote region of Papua New Guinea.

Peter White is Honorary Research Associate in Archaeology, University of Sydney. His lifetime research interest is the archaeology of New Guinea and Australia. He has edited the journal Archaeology in Oceania for more than 20 years. His recent publications include articles on Pleistocene animal translocation, Lapita pottery and writing for publication.