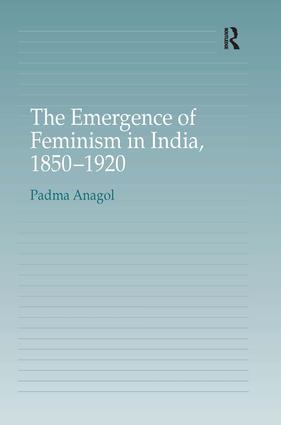 Grounded in a variety of rich and diverse source materials such as periodicals meant for women and edited by women, song and cookbooks, book reviews and court records, the author of this pioneering study mobilises claims for the existence of an Indian feminism in the nineteenth century. Anagol traces the ways in which Indian women engaged with the power structures-both colonialist and patriarchical-which sought to define them. Through her analysis of Indian male reactions to movements of assertion by women, Anagol shows that the development of feminist consciousness in India from the late nineteenth century to the coming of Gandhi was not one of uninterrupted unilinear progression. The book illustrates the ways in which such movements were based upon a consciousness of the inequalities in gender relations and highlights the determination of an emerging female intelligentsia to remedy it. The author's innovative study of women and crime challenges the notion of passivity by uncovering instances of individual resistance in the domestic sphere. Her study of women's perspectives and participation in the Age of Consent Bill debates clearly demonstrates how the rebellion of wives and their assertion in the colonial courts had resulted in male reaction to reform rather than the current historiographical claims that it was a response purely to threats posed by 'colonial masculinity'. Anagol's investigation of the growth of the women's press, their writings and participation in the wider vernacular press highlights the relationship between symbolic or 'hidden' resistance and open assertion by women.

'Rooted in densely empirical work and drawing on an archive largely unknown in western scholarship on Indian women, this is an original, well-written and erudite book.' Antoinette Burton, University of Illinois, Urbana-Champaign 'Dr Anagol takes us in this book on a pathbreaking - and exciting - journey through western India in the 19th and 20th centuries. She guides us through a gendered terrain that has been unknown in such extent and depth. She retrieves the agency in women’s actions and in their pasts, introduces us to new territory, and in so doing alters permanently our understanding of this time and place. This is major research of the highest quality and represents a highly significant contribution to understanding Indian history.' Jim Masselos, University of Sydney ’… a most welcome addition to the growing number of monographs on the history of Indian women in colonial India… This book is a must-read for those who study colonial history and would be a wonderful book to use in a course on Women/Gender in India.’ Labour/Le Travail ’… a detailed and convincing exploration of women's identity, autonomy, assertion and resistance in late nineteenth- and early twentieth-century Maharashtra… There is a great deal to admire in this book. Its skilful deployment of a range of sources draws one into a late nineteenth-century world of female activity, assertion and expression in western india, topics that up to now had only been treated superficially. The shift in focus away from Bengal and away from male-led reform campaigns is a welcome antidote to much existing scholarship. More importantly, by choosing an earlier chronological focus than most works on the Indian women's movement, Anagol is able to make a convincing and detailed case to support her central contention about the nineteenth-century roots of Indian feminism and to provide rich and detailed insight into the lives, aims and understanding of women of this period.’ International Journ

Dr Padma Anagol teaches British Imperial and Modern Indian History at the Cardiff School of History and Archaeology, Cardiff University, UK. Her research interests straddle gender and women's history of modern India with publications appearing regularly in journals such as History Workshop Journal. She is on the Editorial Board of South Asia Research; Cultural and Social History; Women's History Review and is also the Asia consultant for the BBC History Magazine.