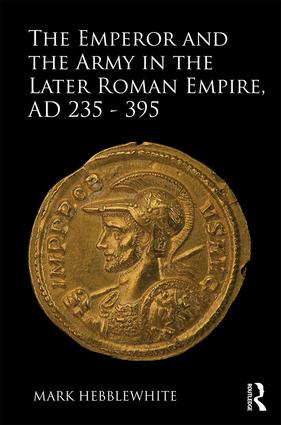 With The Emperor and the Army in the Later Roman Empire, AD 235–395 Mark Hebblewhite offers the first study solely dedicated to examining the nature of the relationship between the emperor and his army in the politically and militarily volatile later Roman Empire. Bringing together a wide range of available literary, epigraphic and numismatic evidence he demonstrates that emperors of the period considered the army to be the key institution they had to mollify in order to retain power and consequently employed a range of strategies to keep the troops loyal to their cause. Key to these efforts were imperial attempts to project the emperor as a worthy general (imperator) and a generous provider of military pay and benefits. Also important were the honorific and symbolic gestures each emperor made to the army in order to convince them that they and the empire could only prosper under his rule.

"Hebblewhite does an admirable job of presenting the ofttimes contradictory literary, epigraphic, and numismatic evidence (both inscriptional and iconographic), confronting the issues it raises, and coming to conclusions […] The book is clearly written and well organized."

"This is a stimulating work that provides an easy-to-use catalogue of the coinage and legal sources showing the relationship between the Emperor and the Roman army […] If they’d read Hebblewhite’s book, many late Roman emperors might have been more successful."

"Hebblewhite made a masterful study, being able to bring together a wide range of literary, epigraphic, as well as numismatic evidence, and present us with a convincing and concise analysis of nature of the relationship between the emperor and the army in what was politically and militarily turbulent period for the Later Roman empire […] Hebblewhite’s book is a valuable contribution to the field that nicely complements Campbell’s earlier work and provides us with a badly needed insight into the emperor’s relationship with the military in the late antiquity. As such, it should be a mandatory addition to every university library"

"….Hebblewhite’s study is filled with new materials and original viewpoints, especially in the economic, monetary and numismatic spheres relating to the Roman army. It will surely be of value and importance to scholars and students of the period for many years to come."

"As such, his book provides a useful introduction to this specific historiographical problem, a thought-provoking reading, and a good starting point for more nuanced and comprehensive analyses."

"In this learned, clearly written, and visually pleasing monograph, Mark Hebblewhite explores the fraught relationship between the emperor and the soldiers he led."

"This book offers a compact and source-oriented access to the relationship of emperor and army in the 3rd and 4th centuries."

, the Army and the Emperor

Chapter 1 – Dawn of the Warrior Emperor

Coinage and the Projection of Military Power

, Victoria and an empire in crisis

: The courage to lead

Diocletian to Theodosius the Great: new messages for a new age

The Titulature of Military Success

Tetrarchs and dynasts: the titulature of shared military success

Praemia Militiae of the Republic and Early Empire

The Economics of Praemia Militiae

Chapter 4 - The Emperor, The Law and Disciplina Militaris

Soldiers and their families

Barbarians in a citizen army

: The First Act of Fidelity?

in the age of the soldier emperors

The ceremony of adlocutio

The impact of adlocutio

Empty words in an age of chaos

: Heart of the Unit?

Imperial Co-option of the signa militaria

Images of Identity, Images of Power

Diocletian, Constantine and the honorific epithets of the Notitia Dignitatum

, Gloria and the Fourth Century Army

Mark Hebblewhite completed his PhD at Macquarie University, Australia, in 2012 and has taught widely in the field of Ancient History. His research interests centre on the ideology and politics of the later Roman Empire, with particular reference to the role of the army. He is currently an Adjunct Associate Lecturer at the University of New South Wales, Australia.