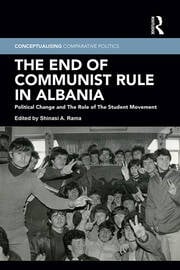 The End of Communist Rule in Albania: Political Change and The Role of The Student Movement

This book provides a comprehensive examination of the Albanian Student Movement of 1990–1991. To date, there are no thorough studies of the first year of the post-Communist transition in Albania, which constitutes the most critical period of transition. The lessons to be learned are vast and of great importance to the debates on social movements, mobilization, and transition.

Renowned scholars of modern Albanian history, led by the former leader of the Albanian Student Movement, Shinasi A. Rama, provide a study of the critical role played by this movement in the political transformation of Albania from a totalitarian cult-state to a multiparty political system during 1990–1991. Their informed analyses combined with first-hand knowledge of the events during a key period of Albanian history shed light on the Student Movement, its ideology, values, contributions, and its relationship to the system and to the ruling caste. The authors come to the core conclusion that the Student Movement remained an independent player that achieved change in the political system at a crucial juncture.

The End of Communist Rule in Albania

is a much-needed contribution in the fields of social movements, democratization studies, Communist and Post-Communist politics, and Albanian Studies.

1. Who Slew the Dragon?! The Collapse of Communism, Political Change and the Student Movement in Albania [Shinasi A. Rama]

Part 1: The Regime in a Deep Crisis: The Albanian Case

2. Coming to an End: The Fall of the Communist Rule in Albania [Fatos Tarifa]

3. Contributing Actors to the Regime Change in Albania: The First Phase of Transition and the Role of the Albania Student Movement [Mirela Bogdani]

Part 2: The Evolution of the Student Movement and its Role in the Dynamics of Political Change

5. The Rise of the Student Movement and its Role in the Collapse of the Communist Regime [Llukman Halili]

6. The Idea of the Nation-State and the Student Movement [Grid Rroji]

7. Considerations on the Leadership Dynamics During the First Stage of Transition [Valbona Karanxha]

8. Competing Visions: Albanian Youth and Students in the Late-Communist Period and the Political Elite [James Pettifer]

9. What kind of Democracy? Which Kind of Pluralism? Comparing President Ramiz Alia’s Meetings with the Intellectuals and the Student Representation [Afrim Krasniqi]

13. The Dragon did not Commit Suicide: The Collapse of the Totalitarian Cult-State and the Role of the Student movement in Albania [Shinasi A. Rama]

Shinasi A. Rama is Clinical Professor of Politics with the International Relations Program at New York University. He was a co-founder of the Democratic Party of Albania, served as the Spokesman of the Provisional Government of Kosova in the USA, and was the Political Advisor of the Kosovo Liberation Army. After the war, Prof. Rama served as a Senior Political Advisor to the Prime Minister of the Interim Government of Kosova and an Adviser to the Commandant of the Kosovo Protection Corps. He served as the Editor-in-Chief of The International Journal of Albanian Studies.

"This book is a much-needed contribution to the literature on modern Albanian politics. Its rich account of the student movement and its contribution to political change in Albania also serves as a very valuable case study for the students of social movements and political transition. It deserves to be read and discussed." — Mehmet Tabak, Adjunct Professor, New York University