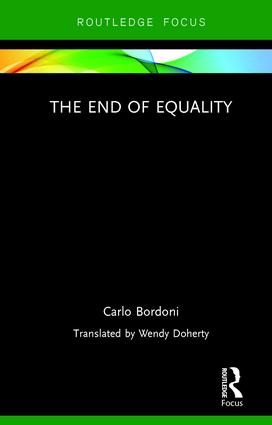 The End of Equality

The economic crisis has brought social differences to the fore, reinventing the old question of inequality as democracy’s missed opportunity. Many have attempted to find a rational explanation of the problem, tracing it back to poor economic policy and reckless liberalisation of finance, or the crisis of banks and governments, as well as the collapse of family relationships. At the same time, globalisation has reduced the differences between some nations, bringing emerging countries to the level of the more advanced, but has dangerously increased internal inequalities. In this book, the author examines the question of inequality and the social problems it is creating in societies across the world, arguing that with the crisis of modernity, the ideal of equality appears to be over. As more and more of the world’s resources are concentrated in ever fewer hands, the promise of mass society as a means to grant equality and cancel the differences of classes appears to be giving way to a rising individualism. This book asks whether the apparent end of mass society will coincide with the end of equality and a re-evaluation of the worth of the individual. Are we heading towards a liquid world in which being equal is now considered less a virtue than a weakness?

'A very important addition to the growing literature on rising inequality - reflecting the rising of public anxiety about the future of human togetherness. An erudite, in-depth analysis of the three hundred years long history of the modern postulate/promise of leveling up the differences between individuals' life quality, life's prospects as well as the social positions that result the degrees of social recognition and respect those positions offer; and an insight into the short-, middle- and long-term consequences of the collapse of that postulate and the withdrawal of that promise.'- Zygmunt Bauman, Professor Emeritus of Sociology at the University of Leeds, UK

2. A crisis of modernity

3. From social darwinism to massification

5. Forms of inclusion and exclusion

7. The measure of inequality

Carlo Bordoni is a sociologist and journalist, former lecturer at the University of Florence and Director of the Academy of Fine Arts, Italy. He writes for the Italian newspaper Il Corriere della Sera and its literary supplement, La Lettura; for the quarterly Prometeo and for the journal Social Europe on-line. He is the author of Interregnum: Beyond Liquid Modernity, and the co-author, with Zygmunt Bauman, of State of Crisis.