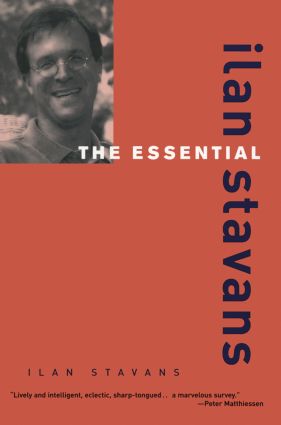 Here, Ilan Stavans, one of the foremost Latino scholars, collects his best essays into one volume. As a Mexican Jew whose native languages are Yiddish and Spanish, Stavans writes in English to limn the tensions, contradictions, and possibilities within the compex notion of a multi-cultural identity.

"…the range of essays, the literary criticism and, indeed, the short storeis in [this] volume should convince the reader that [Stavans] has acquired eyes that can look everywhere, see everything and, more importantly, unravel what they have perceived." -- Jewish Quarterly, Moris Farhi

"[The Essetial Ilan Stavans is] to be savoured, to be dipped into time and again and each time to be surprised happily that there is always something new in each of them." -- Jewish Quarterly, Moris Farhi

"This engrossing collection of essays from scholar Stavans targets Latino American identity, politics, popular culture, Spanglish, and the intimate relationships among memory, translation, and literature. Spanning the last six years, the essays encompass astute cultural analyses of Latin American politics and its leaders-from Mexico's Subcommandante Marcos to Peru's Abimael Guzman of the Maoist Shining Path-and display a sensitive, if at times romantic, look at the historical, cultural, and linguistic nuances that brand "life in the hyphen." Stavans's studies of the oeuvres of varied male writers, such as Walter Benjamin, Octavio Paz, Lionel Trilling, and Elias Canetti, enhance the author's exploration of his own Jewish-American roots and illuminate a deeper understanding of the complex nature of identity and the effect of life on literature." -- Library Journal

"These reflections where the you and yo, Anglo and Spanglo, are joined in the richness of one Latino intellectual and artistic tradition make for stimulating reading. Positive, exaltant, anti-provincial, and inspiring, Stavans gives the reader the opportunity to celebrate the creation of a new Latino self in which we are not one but many, and the border becomes our 'dream catcher,' the magic web which permits us to re-invent the future." -- Rosario Ferré, author of The House on the Lagoon and Eccentric Neighborhoods

"Ilan Stavans may be our most savvy reader. The 'we' in that sentence provides a space in which many groups can truly identify. He is a brilliant participant and reader of Mexican, Latin and South American literature and culture. He is an incisive and critical voice in and of the Jewish world in Hispanic America. He is one of the best the critics and interviewers in the North American, Anglophone world. An Ilan Stavans reader-something for everyone and something of true quality." -- Sander L. Gilman, The University of Chicago

"Stavans is bold, engaging, refreshingly agile as narrator and essayist, and this Reader is a most impressive accomplishment. Curious, but also familiar (unheimlich, in Freud's insider expression) for Jewish literature, cultural differences co-exist in one writer and that they shed ironic light on one another. This is increasingly unavoidable for Latinos who are doubly American by definition (often with dual nationalities). Latino arts will embrace Stavans' challenge of irony and multiple identities, in its parallel with Jewish 'double consciousness' as the normal condition of diaspora. It's this diasporic cosmopolitan condition that allows Stavans to move from one position to another, to make connections, and to provoke his admiring readers." -- Doris Sommer, Harvard University

"It is rather infrequent that an intellectual in the United States will occupy himself with the literary currents of Latin America in a manner that is thoroughly conscious and rigorous, demonstrating a sincere and endurable interest in the region. This volume by Ilan Stavans fills a vacuum that has threatened to become both chronic and inexplicable. Each of its entries is a display of absolute devotion and passion. It evinces a singular mastery of the craft of the essay and reaches unexpected levels of depth. English-language readers will come tete-a-tete with the real continent they left unknown for far too long. And of course, the book will be equally enlightening to the Spanish-speaking public who will understand themselves in ways not previously imagined." -- Alvaro Mutis

"More than an anthology, this book is a tribute to the work of a talented young writer, with an original vision of contemporary problems, specially those related to cultural identities (Latino, Jewish, American) and pop culture. Writing about Spanglish or Canetti, Jewish gauchos or the Latin Phallus, Rigoberta Menchu or Octavio Paz, Cantinflas or García Marquez, Stavans opens to the reader the doors of a world (or several worlds). He is not only a keen essayist, he is also an excellent fiction writer, as demonstrated by the short stories in this volume. In short: Ilan Stavans gives us a comprehensive and affectionate panel of human and intellectual profiles of our times." -- Moacyr Scliar

"Ilan Stavans is a prodigious reader and listener, and also an acute observer of American ways, in particular those half-hidden literary cultures and sub-cultures of the southern continent that are so often misread in the United States. He is also a very good writer, adn his essay collection-lively and intelligent, eclectic, sharp-tongued yet fair-minded-is a marvelous survey of cultural matters that most of us imagined that we knew about but really didn't." -- Peter Matthiessen

"Ilan Stavans, a Mexican Jew writing in English, has the sharp eye of the internal exile. Writing about the sometimes reluctant reconquista of North America by Spanish-speaking cultures or the development of his own identity, Stavans deals both with the life of the mind and life on the streets. Literary criticism, social essays, stories-this book examines the conflicts and contradictions of that frontier where Kafka meets NAFTA." -- John Sayles, author of Los Gusanos and director of Lone Star

"Ilan Stavans is the rarest of North American writers--he sees the Americas whole. Not since Octavio Paz has Mexico given us an intellectual so able to violate borders, with learning and grace." -- Richard Rodriguez

"Cantankerous and clever, sprightly and serious, Stavans is a voracious thinker. In his writings, life serves to illuminate literature-and vice versa; he is unafraid to court controversy, unsettle opinions, make enemies. In short, Stavans is an old-fashioned intellectual, a brilliant interpreter of his triple heritage-Jewish, Mexican, and American." -- Henry Louis Gates, Jr.

Ilan Stavans is Professor of Spanish at Amherst College. And internationally respected scholar and essayist, he is the author or editor of over twenty books on Latino life in the United States, including Growing up Latino: Memoirs and Stories and The Hispanic Conditions: Reflections on Culture and Identity in America. Forthcoming books from Stavans include Latino USA: A Cartoon History; The Norton Anthology of Latino Literature, and The Sounds of Spangish. He is also editor-in-chief of Hopscotch: A Cultural Review, published by Duke University Press.