The Ethnomusicologists' Cookbook, Volume II
Complete Meals from Around the World 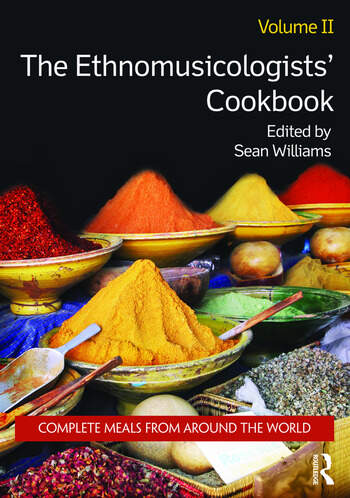 The Ethnomusicologists' Cookbook, Volume II: Complete Meals from Around the World

This companion to The Ethnomusicologists' Cookbook combines scholarship with a unique approach to the study of the world's foods, musics, and cultures. Covering over four dozen regions, the entries in these collection each include a regional food-related proverb, a recipe for a complete meal, a list of companion readings and listening pieces, and a short essay that highlights the significant links between music and food in the area. The Ethnomusicologists' Cookbook, Volume 2 will appeal to ethnomusicologists, anthropologists, and sociologists, but should also find a welcome place on the bookshelf of anyone who enjoys eating and learning about foods from around the world.

Sean Williams teaches ethnomusicology at The Evergreen State College in Washington State. Her publications include The Sound of the Ancestral Ship: Highland Music from West Java (2001), Focus: Irish Traditional Music (2010), and the award-winning Bright Star of the West: Joe Heaney, Irish Song-Man (2011).

With Volume II of the Ethnomusicologists’ Cookbook, Sean Williams and colleagues have created an astonishing global cookbook. It’s more than a cookbook.  The contributing scholars’ deep roots in 26 cultures/countries whose sounds and tastes they love are evident in descriptions of cooking processes, stories of the ways music and food come together in daily life and, of course, suggested music for your dining pleasure.  Yum! - Dr. Beverley Diamond, President, Society for Ethnomusicology

Once again, my two favorite things--food and music--have come together in an abundance of delicious recipes and listening opportunities. This second volume of The Ethnomusicologist's Cookbook, like the rewarding second movement of a great musical work, spins the various ingredients into a hearty and soul-satisfying mix. - Ellen Koskoff, Professor of Ethnomusicology, University of Rochester