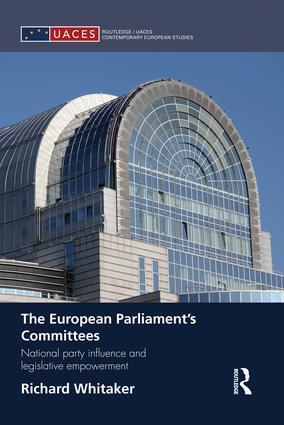 This book analyzes the development of the European Parliament’s (EP) committees and their relationship with national political parties in the light of the EP’s increased legislative role over the last three decades.

The book argues that national parties have a greater incentive to care about what goes on in the EP given the growth in its legislative power. Because most of the EP’s detailed legislative work takes place in its committees, national parties should be concerned about their involvement with the EP’s committee system. Based on extensive original research, this book shows how the EP’s committees have changed over time in response to legislative empowerment and analyzes how national parties and individual MEPs use the committee system to further their policy goals. The book makes a theoretical contribution by providing an explanation for the variation in powers of committees between separated and fused systems of government and by adapting theories of legislative organization developed in the context of the US Congress, to the EP.

'Richard Whitaker’s elegant and deceptively simple study is an important and convincing addition to the increasingly empirical literature about the European Parliament (EP).' - Martin Westlake, The Journal of Legislative Studies, Vol. 17, 4, November 2011

‘The committees of the European Parliament are highly influential in shaping EU legislation. Yet scholarly knowledge of how they function has remained limited until now. Theoretically informed and methodologically sophisticated, Whitaker's excellent study explains the development of the EP committee system, paying special attention to how national parties and MEPs use committees for advancing their policy goals. Absolutely essential reading for students of EU policy-making and parliaments.’ - Professor Tapio Raunio, University of Tampere, Finland

‘In this first ever book-length treatment of the subject, Richard Whitaker provides the definitive account of how and why the European Parliament's committees matter both to the role of the members of the European Parliament and, more importantly, to their national party leaders. To understand the committees is to understand the parliament.’ - Professor David Farrell, University College Dublin

‘This is the most important book thus far on what happens inside the European Parliament's committees, which is where much of the legislative business of Brussels now takes place. Using innovative theoretical ideas and empirical techniques as well as new data, Whitaker finds that national parties are the key players inside the committees. This finding reinforces a particular conception of how EU politics works.’ - Professor Simon Hix, London School of Economics and Political Science

Richard Whitaker is Lecturer at the Department of Politics and International Relations, University of Leicester, UK.