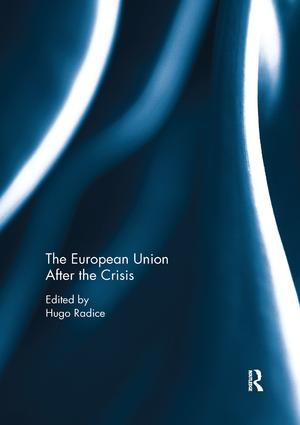 The European Union After the Crisis

The global financial and economic crisis struck the European Union and its member states with particular force from 2009 onwards. The immediate problem was the knock-on effects of the crisis on each country’s public finances. Bank bail-outs imposed a massive increase in sovereign debt on member states, while the economic recession unavoidably led to ballooning budget deficits via the usual mechanisms of reduced taxes and increased welfare spending. Subsequently, the Eurozone sovereign debt crisis exposed the hidden weaknesses in the monetary and financial arrangements that had accompanied the launch of the Euro; the severe economic imbalance between member states, rooted in longer-term structural divergences, and the inadequate institutional mechanisms for resolving these difficulties.

This book originated from an EU-funded international research network on "Systemic Risks, Financial Crises and Credit: the Roots, Dynamics and Consequences of the Sub-Prime Crisis". Contributions explore and evaluate some of the ways in which the institutions and policies of the European Union and its member states have changed in response to the problems brought about by the crisis. This book was originally published as a special issue of the Journal of Contemporary European Studies.

2. The Heterogeneity of Capitalism in Crisis-Ridden Europe

4. Exploring the Keynesian-Ordoliberal Divide: Flexibility and Convergence in French and German Leaders’ Economic Ideas During the Euro-Crisis

5. From the Maastricht Treaty to Post-Crisis EMU: The ECB and Germany as Drivers of Change

6. Enforcing Austerity in Europe: The Structural Deficit as a Policy Target

7. The European Social Model After the Crisis: The End of a functionalist Fantasy?

Hugo Radice is a Life Fellow in the School of Politics and International Studies, University of Leeds, where he taught economics and politics from 1978 to 2008. He now works as an independent researcher in political economy, with particular reference to the recent economic crisis.