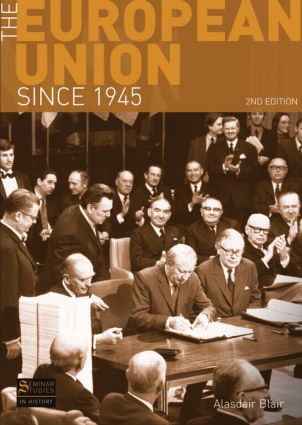 The European Union Since 1945

The European Union faces a crossroads in the twenty-first century. While there is evidence of declining enthusiasm for European integration, the EU plays an increasingly vital role in tackling problems that can no longer be dealt with at member state level. In recent years, the EU has developed a stronger foreign, security and defence policy, and has had to face up to the challenges of tackling organised crime, human trafficking and drug smuggling.

In this fully updated new edition, Alasdair Blair examines the economic, political, social and personal factors that have shaped the process of European integration from the end of the Second World War until the Lisbon Treaty in 2009. Written in a clear and jargon-free style, the book explores:

Comprehensive and accessible, this book is an essential guide to understanding the relevance of the European Union in the twenty-first century.

“The European Union Since 1945 should be read by undergraduates in introductory EU courses, policy practitioners who are interested in how the European project developed over time, and by the intelligent general reader. This is an excellent example of how an accessible textbook with crucial supporting documents should be written, documented and presented.”

“…The most concise and accurate description of the development of European institutions and their policies.”

“The author is balanced in his presentation of the controversies surrounding the organisation and its future.”

1. THE PROBLEM OF EUROPEAN INTEGRATION

The Emergence of European Unity

The Coal and Steel Community

The Failure of the European Defence Community

The Spirit of the Hague

The Fifth Enlargement and Constitutional Reform

7. THE FUTURE OF EUROPEAN INTEGRATION

The future of European integration

is Professor of International Relations and Head of the Department of Historical and Social Studies at De Montfort University. He is the author of eight books, including International Politics: An Introductory Guide (2009) and Companion to the European Union (2006).