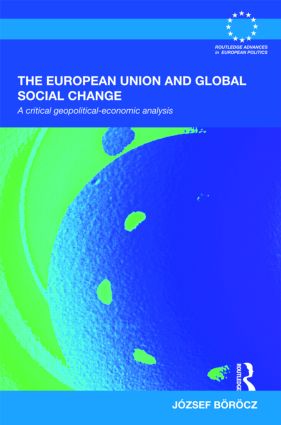 This book examines just what the European Union is, in the context of the ongoing structural transformation of the global system. The author develops an integrated approach to global transformations, drawing on geopolitics, political geography, international relations, economics, economic and political history, political economy and macro-sociology to discuss how this supra-state organisation, that shares and pools the sovereignty of some of the wealthiest states of the modern world, makes sense. The book:

This book received an "Honorable Mention" in the 2011 book award competition of the Political Economy of the World-System section of the American Sociological Association.

'There are few books that can offer such broad historical and geographical scope in an attempt to understand the present-day European Union. In the author’s terms the book aims “to reconstruct the European Union’s historical geopolitical genealogy by situating its emergence within the historical context of global capital and modern west European statehood” (p. 2). This is in fact an underestimation of its ambition; the book also successfully places the EU in the context of the colonial legacy of European nation-states, on which count alone its makes a very significant addition to the literature.' - Chris Rumford, University of London in the American Journal of Sociology

'Böröcz opens up exciting new directions for research on the European Union and provides novel analytical and quantitative tools for social criticism. As such, the book will be very useful to graduate students and, thanks to the clarity of its arguments and language, even to advanced undergraduates in history and the social sciences. I anticipate that students of state and postsocialism will also be inspired to carry out analogous inquiries into the relationships between the former Second and Third World. Overall, this is a must-read for students of globalization, colonialism, and postsocialism, and it will certainly hold great appeal to scholars interested in world-systems theory, economic sociology, postcolonial studies, and comparative-historical methods.' - Zsuzsa Gille, Journal of World-Systems Research, 17: 2

'This book offers a truly provocative and thoughtful historical-sociological macroanalysis of global social change concerning the last 500 years. The reader is constantly reminded that mainstream (and even not so mainstream) knowledge and ideas s/he has learnt concerning the rise (and the current fall) of Europe and the West are not only wrong – as they are biased and mis-focused reflections of reality – but also deceptive. They mislead not only interested scholars and students of macro-historical structures, but also those politicians, business people and geopolitical experts who truly want to see why Europe and the West are losing power and control, regardless of their previous privileged position.' - Attila Melegh, International Sociology Review of Books 27(2)

József Böröcz is Professor of Sociology at Rutgers University, USA; Faculty Associate of the Center for Migration and Development at Princeton University; and Scholarly Advisor at the Institute for Political Studies of the Hungarian Academy of Sciences. His publications include Leisure Migration: A Sociological Analysis; (as co-editor) A New World Order? Global Transformation in the late 20th Century and Empire’s New Clothes: Unveiling Eastern Elargement.

Further details can be found at his website: http://borocz.net