The European Union and its Eastern Neighbours
Towards a More Ambitious Partnership? 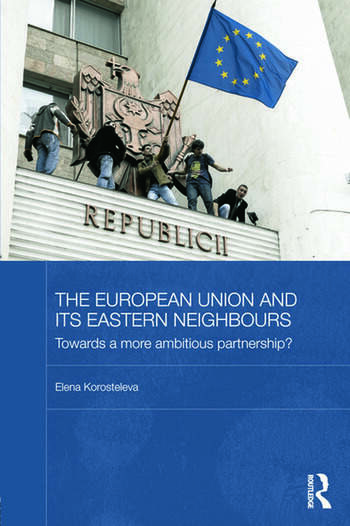 The European Union and its Eastern Neighbours: Towards a More Ambitious Partnership?

This book explores the EU’s relations with its eastern neighbours. Based on extensive original research – including surveys, focus-groups, a study of school essays and in-depth interviews with key people in Belarus, Ukraine, Moldova, Russia and in Brussels – it assesses why the EU’s initiatives have received limited legitimacy in the neighbourhood.
The European Neighbourhood Policy of 2004, and the subsequent Eastern Partnership of 2009 heralded a new form of relations with the EU’s neighbours – partnership based on joint ownership and shared values – which would complement if not entirely replace the EU’s traditional governance framework used for enlargement. These initiatives have, however, received a mixed response from the EU’s eastern neighbours. The book shows how the key elements of partnership have been forged mainly by the EU, rather than jointly, and examines the idea and application of external governance, and how this has been over-prescriptive and confusing.

Elena Korosteleva is Jean Monnet Chair in European Politics and Director of the Centre for European Studies at Aberystwyth University, UK.  She is the editor of The Eastern Partnership: a New Opportunity for the Neighbours? (2011), and co-editor of The Quality of Democracy in Post-Communist Europe (2006) and Contemporary Belarus: Between Democracy and Dictatorship (2003), all published by Routledge.

"This is an important addition to the literature and ought to be on the reading list of any study programme in this field."

"One of the important features of this monograph is that it is based on extensive original research including surveys, focus groups, studies on school essays and interviews... This monograph based on original research is a valuable contribution to the ongoing debate on EU’s eastern approaches and EU’s reach as a normative and civilian power well beyond its neighbourhood. It advances the conceptualization of ‘partnership’ and ‘governance’ as features of (EU) foreign policy while brining in the debate cognitive elements. Especially, the primary material included in the book could prove useful to any researcher on this topic. The way that interviews and opinions of officials are incorporated into the main text makes the monograph an interesting reading."

"Elena Korosteleva’s book - The European Union and its Eastern Neighbours: towards a more ambitious partnership? - provides an excellent account of the EU’s relation with its Eastern neighbours. It is a thorough investigation into the nature of this relation by including extensive original research (i.e. surveys, focus groups, interviews) mainly conducted in Belarus, Moldova, Ukraine, Russia and Brussels. The book is clearly organised and full of stimulating thoughts following the same rigurous writing style and sharp inquiries of the most critical issues professor Korosteleva used us with. It is not surprising her astute academic endeavour has been rewarded. Many of the ideas which undergird this monography have been included into the European Commission’s official paper, the 2011 European Neighbourhood Policy Review.[…] All in all, this book is a highly valuable addition to the literature. It has also opened up new opportunities for further research on the eastern dimension of the EU’s neighbourhood policy, serving as an excellent source for both scholars and practitioners. In spite of its critical nature, the book is arguably a plea in favour of the EU to overhaul its approach towards the eastern neighbourhood. Furthermore, the author has succeeded in providing many answers as well as raising new questions regarding the viability of such a neighbourhood project, but even more so for the "precise nature of the EU as a transformative force (...) on the international arena" (p. 127). Actually, its originality resides in its strength to incorporate the extensive body of empirical evidence collected into the appropriate theoretical framework."