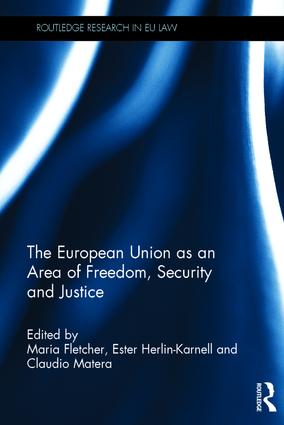 The European Union as an Area of Freedom, Security and Justice

This book presents a collection of essays on key topics and new perspectives on the EU’s Area of Freedom, Security and Justice (AFSJ) and has a Foreword by the President of the Court of Justice of the European Union, Prof. Dr. Koen Lenaerts.

Europe’s area of freedom, security and justice is of increasing importance in contemporary EU law and legislation. It is worthy of special research attention because of its high-stakes content (particularly from an individual and a state perspective) and because its development to date has tangentially thrown up some of the most important and contentious constitutional questions in EU law.

As the AFSJ becomes more and more intertwined with ‘mainstream’ EU law, this edited collection provides a timely analysis of the merger between the two. Showcasing a selection of work from key thinkers in this field, the book is organised around the major AFSJ themes of crime, security, border control, civil law cooperation and important ‘meta’ issues of governance and constitutional law. It also analyses the major constitutional and governance challenges such as variable geometry, institutional dynamics, and interface with rights around data protection/secrecy/spying. In the concluding section of the book the editors consider the extent to which the different facets of the AFSJ can be construed in a coherent and systematic manner within the EU legal system, as well as identifying potential future research agendas.

The European Union as an Area of Freedom, Security and Justice

will be of great interest to students and scholars of European law and politics.

Foreword Prof. Dr. Koen Lenaerts, President of the Court of Justice of the European Union

Part I: The EU as an Area of Freedom, Security and Justice

Part VI: Legal challenges of network governance within the Area of Freedom, Security and Justice

Maria Fletcher is Senior Lecturer in European Law at the University of Glasgow. Her research interests lie in the ﬁeld of EU AFSJ law and EU constitutional law more generally. She is co-author of the ﬁrst book published in English on EU Criminal Law and Justice (Edward Elgar, 2008, with Robin Lööf and William Gilmore) and has undertaken funded research and published widely on EU criminal, immigration and asylum and citizenship law.

is the Co-director of the VU Centre for European Legal Studies and Professor and Research Chair in EU Constitutional Law and Justice. She holds a DPhil from Oxford University. She has published widely on AFSJ law. Her recent publications include a monograph on the Constitutional Dimension of European Criminal Law (Hart Publishing, 2012).

is Assistant Professor for the Chair of International and European Law and Government at the University of Twente (NL). His research and publica- tions focus on the external dimension of the AFSJ.