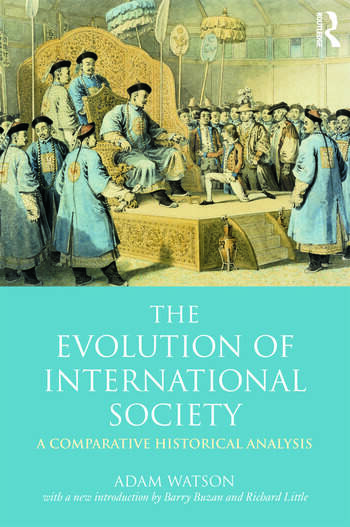 The Evolution of International Society: A Comparative Historical Analysis Reissue with a new introduction by Barry Buzan and Richard Little

`This is a real feast of a book. ... a landmark book. It is clear enough to be used as a teaching text, and could make an excellent introduction to the discipline for those courageous enough to revise their courses.' International Affairs

`This is a bold, successful and valuable book... It is written with admirable clarity and merciful conciseness.' International Relations

`A stunning success. Watson's book is a masterful piece of theoretical and historical analysis.' John A. Vasquez, Rutgers University

Adam Watson, who died in 2007, was a former diplomat who in his later academic career became a pioneer of the discipline of international relations. Originally published in 1992, The Evolution of International Society made a major contribution to international theory and to our perception of how relations between states operate, and established Watson’s place within the canon.

This acclaimed and uniquely comprehensive work explains how international societies function across time, starting by examining the ancient state systems before turning to look in detail at the current worldwide international society. The book demonstrates that relations between states are not normally anarchic, but are in fact organized and regulated by elaborate rules and practices.

In this timely reissue, a new introduction by Barry Buzan and Richard Little assesses Adam Watson's career as a diplomat and examines how his work as a practitioner shaped his subsequent thinking about the nature of international society. It then contextualises Watson's original work, situates it alongside current work in the area and identifies the originality of Watson's key arguments, helping us to understand Watson’s place within the canon.

Adam Watson was a diplomat and historian, and formerly Professor of International Relations at the University of Virginia. His publications include The Limits of Independence (1997) and Diplomacy: the Dialogue between States (1982).

Barry Buzan is a Professor in the Department of International Relations at the London School of Economics and Political Science. His publications include From International to World Society? English School Theory and the Social Structure of Globalization (2004) and The United States and the Great Powers: World Politics in the Twenty-First Century (2004).

Overall, this is the most important book on international politics of our decade, and perhaps of our generation. It is extraordinary in its range -- both historical and analytical. No other work evaluates with comparable range and clarity the defining characteristics of so many international systems. No other work is as imaginative in its analytic framework. It carries us far beyond the narrow limitations of analyses that equate the independence end of the spectrum of political reality with that reality itself. Adam Watson's book provides the foundation for a new and creative era in international political analysis. All significant work in the future in our field must take into account his insights. - Whittle Johnson, University of Virginia

`This is a real feast of a book. ... a landmark book. It is clear enough to be used as a teaching text, and could make an excellent introduction to the discipline for those courageous enough to revise their courses.' - International Affairs

`... international historians will find it and interesting and stimulating survey. ... Watson's book must be seen as and important step towards a more sophisticated international theory.' - History

`This is a landmark book. It is clear enough to be used as a teaching text, and could make and excellent introduction to the discipline for those courageous enough to revise their courses.'

`This is a bold, successful and valuable book...It is written with admirable clarity and merciful conciseness.' - International Relations