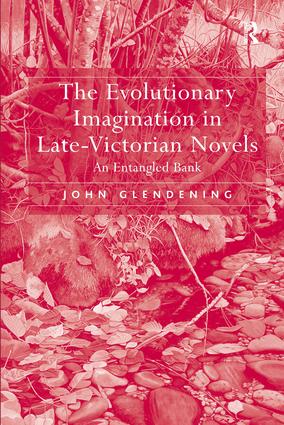 The Evolutionary Imagination in Late-Victorian Novels

Dominated by Darwinism and the numerous guises it assumed, evolutionary theory was a source of opportunities and difficulties for late Victorian novelists. Texts produced by Wells, Hardy, Stoker, and Conrad are exemplary in reflecting and participating in these challenges. Not only do they contend with evolutionary complications, John Glendening argues, but the complexities and entanglements of evolutionary theory, interacting with multiple cultural influences, thoroughly permeate the narrative, descriptive, and thematic fabric of each. All the books Glendening examines, from The Island of Doctor Moreau and Dracula to Heart of Darkness, address the interrelationship between order and chaos revealed and promoted by evolutionary thinking of the period. Glendening's particular focus is on how Darwinism informs novels in relation to a late Victorian culture that encouraged authors to stress, not objective truths illuminated by Darwinism, but rather the contingencies, uncertainties, and confusions generated by it and other forms of evolutionary theory.

’Through close reading and careful contextualization, Glendening […] persuasively delineates the impact of evolutionary anxieties on the fin-de-siècle British novel….Recommended.’ Choice ’… frequently eloquent and astute about Hardy's fictional assimiliation of scientific pursuits that attempt to reconstruct the trajectory of man's collective past… Glendening's book is a trenchant addition to research produced by such seminal commentators as Gillian Beer, Roger Ebbaston, Peter Morton, Roger Robinson and James Kasner.’ Hardy Society Journal ’Glendening's book makes a sterling contribution to our understanding of the cultural and literary implications of the development hypothesis. With its magisterial command of primary and secondary materials, its clearly articulated structure and the directness of its style, The Evolutionary Imagination offers a genuinely wide-ranging perspective on the 'entangled bank' and its literary forms. … certainly demands to be read as a richly rewarding analysis of the fertile literary problematic inherent in the fin de siècle trope of the entangled bank.’ Review of English Studies

John Glendening is Professor of English at the University of Montana, USA.