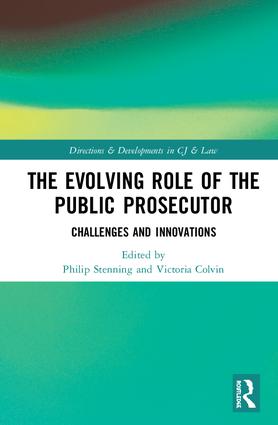 The Evolving Role of the Public Prosecutor

The modern public prosecutor is a figure both powerful and enigmatic. Legal scholars and criminologists often identify “three essential components” of criminal justice systems: police, courts and corrections. Yet increasingly, the public prosecutor occupies a distinct role independent from any of these branches. Acting outside of the court, and therefore largely out of the public eye, the prosecutor’s control over whether and what charges proceed to court can limit judicial discretion on sentencing, open pathways to alternative measures and even deny entry into the criminal justice system entirely. In this sense the prosecutor serves as a true “gatekeeper” to the criminal process.

This book addresses key aspects of the evolving role of domestic and international prosecutors in common law and civil law systems in the twenty-first century, and the challenges posed by this evolution. This collection of chapters from respected scholars takes an international, comparative approach and explores how these different legal systems have borrowed theorisations and articulations of the prosecutorial role from each other in adapting the office to changing conditions and expectations. The volume is structured around four main themes relating to the role of the modern prosecutor: the nature of the prosecutor’s office, the role of the prosecutor in investigations, prosecutorial discretion and how it is exercised, and politicisation and accountability of prosecutors.

This book is essential for scholars and students in criminal justice, pre-law/legal studies, criminology, justice studies and political science, and is useful as a resource for those interested in legal change around the world.

Part I: The Office of the Modern Public Prosecutor

Chapter 4: The Public Prosecution Service and the Structuring of Sentencing – the Nordic Case of Denmark - Rasmus Wandall

Part II: The Role of Prosecutors in Investigations

Chapter 5: The Role of the Finnish Prosecutor in Preliminary Investigations – Efficiency or the End of Impartiality? - Julia Jansson

Chapter 7: Police Prosecution and Access to Justice for People with Disabilities - Penelope Weller

Chapter 8: Roles of Lawyers and Investigators in Investigations of International Crimes - Melanie O’Brien

Part III: The Nature and Extent of Prosecutorial Discretion

Chapter 13: Prosecution and Politics in Germany: The Struggle for Independence - Michael Jasch

Chapter 15: The Decision to Prosecute – The Accountability of Australian Prosecutors - Kellie Toole

Philip Stenning is an Adjunct Professor in the Griffith Criminology Institute at Griffith University in Brisbane, Australia, a Visiting Professor in the Law School at Leeds University in the UK and an Honorary Professor in the School of Applied Human Sciences at the University of KwaZulu-Natal in South Africa. His published books include Appearing for the Crown: A Legal and Historical Review of Criminal Prosecutorial Authority in Canada (1986), The Modern Prosecution Process in New Zealand (2008) and, with David Bayley, Governing the Police: Experience in Six Democracies (2016).