The Façade of Excellence
Defining a New Normal of Leadership 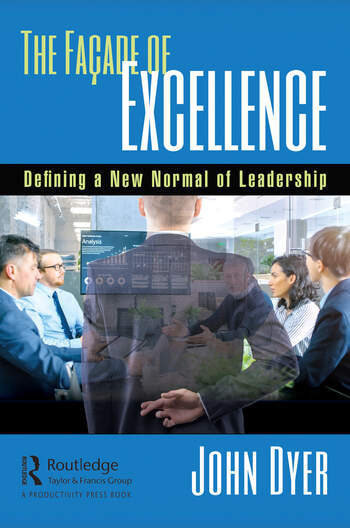 The Façade of Excellence: Defining a New Normal of Leadership

The crucial need to substitute true leadership for bad management practices such as Management By Objectives (MBO) and the use of fear is now well known and was often championed by Dr. W. Edwards Deming. While significant progress has been made, many organizations (especially outside of manufacturing) are either just getting started with their improvement efforts or they are faking their way forward (going through the motions), trying to imitate what they have read in books or have seen at conferences. The executives of these organizations might give permission for the tools of Lean and Six Sigma to be taught but many of them still refuse to look in a mirror and change their own leadership style. They have built a "façade of excellence" that crumbles quickly whenever a bit of chaos is introduced. Not being able to sustain improvements over the long term is one of the top complaints from improvement professionals. What ingredient is missing that prohibits changes to occur throughout the leadership ranks that might create a culture that embraces teamwork, collaboration and improvement?

To start, what exactly do we mean by leadership? The common mistake is to try and put all effective leaders into the same box. Leadership actually has many dimensions and several definitions. This book explores four different styles of leadership that includes "The Crisis Leader," "The Idea Gathering Leader," "The Team Forming Leader," and "The Empowerment Leader."

Each of the four styles is appropriate when given a certain set of circumstances (an organization in trouble needs a "Crisis Leader" for example). The goal is to shift the organization, including the leaders and all of the employees at every level, toward collaboration and empowerment.

Why go through the pains to rebuild an organization’s culture and leaders? In the annual "IndustryWeek Magazine - Best Plants" competition, the companies that have made the transition to high performance, fully empowered teams ("The Empowerment Leader"), in general, demonstrate far better results than all other applicants (and they tend to win "Best Place to Work" awards as well).

So, what is keeping organizational leaders, especially those in the middle of the organization chart, from adopting the "The Empowerment" leadership style? This book defines and helps the reader understand what this new normal of leadership consists of and:

John Dyer is president of the JD&A – Process Innovation Co. and has 32 years of experience in the field of improving processes. He started his career with General Electric and then worked for Ingersoll-Rand before starting his own consulting company.

John graduated in 1985 with an Electrical Engineer degree from Tennessee Tech University and by invitation joined General Electric’s Manufacturing Management Program (a two year program to learn how to be an effective manager within GE that consisted of four, six month assignments in four different manufacturing functions). After graduating, he was assigned to the Major Appliance division as a Process Engineer and within a year was promoted to lead the Process Engineering organization. After showing an interest in a new initiative called continuous process improvement, John was asked to form the first dedicated team of engineers who were tasked with forming shop floor improvement teams.

The GE executives were impressed with the results of these initial teams and asked John to take on a special assignment to go out and benchmark other companies striving for improvement. He attended Stephen Covey’s "Principle Center Leadership," Brian Joiner’s class focused on his "Team Handbook" and on multiple occasions, met with and attended training classes conducted by Dr. W. Edwards Deming.

John developed several training classes to pass along his findings to the GE executives. They asked him to take what he had learned and apply it to the Side by Side refrigeration plant. He became the leader of all of the technical functions within the plant and they implemented a new, team based organizational structure. This resulted in significant improvement in quality, throughput, and cost.

Ingersoll-Rand hired John away from GE in 1995 by offering to fully fund an international executive MBA provided through Purdue University and the University of Rouen in France. After achieving similar results by the use of improvement teams in several IR plants, John worked his way up to a Corporate Vice President role. The organization he led for four years at the corporate level was responsible for spreading lean and Six Sigma throughout the company on a global basis.

John left Ingersoll-Rand in 2005 to start up a new consulting company; JD&A, Inc. – Process Innovations. He has had the opportunity to work with a variety of organizations (both manufacturing and non-manufacturing) of various sizes to help them with their improvement efforts. For the past five years, he has been a Contributing Editor for IndustryWeek magazine and has written over 25 articles (several have been included in the list of top read articles for the year they were posted) as well as conducted workshops at three of the IW conferences and served as a judge in the past five IndustryWeek "Best Plants" annual competitions.

Outside of work, John has served in several leadership roles in his local church and served on the SE Board of Directors for AME (Association for Manufacturing Excellence). He has also partnered with Virginia Technology University to help provide Lean to city and state government agencies.

He can be reached through email at [email protected] and on Twitter at @JohnDyerPI.