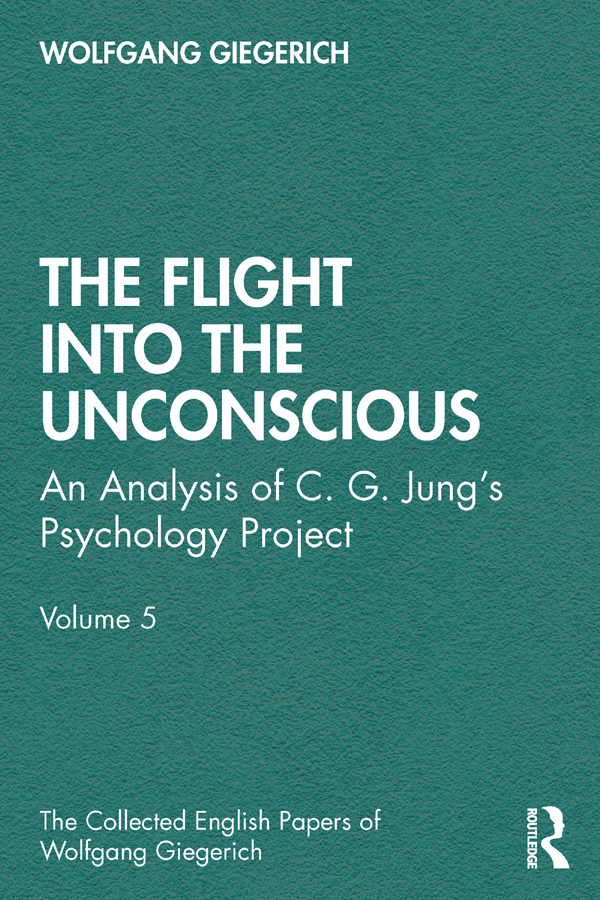 The Flight into The Unconscious

Psychological analysis usually sets its sights upon the patient or upon cultural phenomena such as myths, literature, or works of art. The essays in this volume, by contrast, have another addressee, another subject matter: psychology itself. Deeply informed by Jung’sinsight regarding the discipline’s lack of an objective vantage point outside and beyond the psyche, their Jungian author again and again turns Jung’s contribution to psychology around upon itself in the spirit of an immanent critique. Cutting to the quick, the question is put: in its constitution as psychology is Jungian psychology up to the level of what its insight into psychology’s lack of an Archimedean point would require? Are the interpretations it gives of its various subject matters—alchemy, religion, the unconscious and the rest-matched by its interpretation of itself? Has its meeting itself in them had consequences for itself, consequences in terms of the fathoming of its own truth? Or clinging to the standpoint of empirical observer, did it ultimately demur with regards to the question of their truth and its own - this despite Jung’shaving characterized his work as an opus divinum?

Topics include Jung’s psychology project as a response to the condition of the world, the "smuggling" inherent in the logic of "the unconscious," the closure and setting free dialectic of alchemy and psychology, the blindness to logical form problematic, the faultiness of the opposition "Individual" and "Collective", Jung’s communion fiasco, his thinking the thought of not-thinking, the veracity of his Red Book, the disenchantment complex, and, as indicated in the title of this volume, Jung’s psychology project as a counter-speculative "flight into the unconscious."

1. C. G. Jung's Psychology Project as a Response to the Condition of the World; 2. Psychology as Anti-Philosophy: C.G. Jung; 3. The Disenchantment Complex: C.G. Jung and the Modern World; 4. The Rejection of the Hic: Reflections on C.G. Jung's Communion Fiasco; 5. The Smuggling Inherent in the Logic of the "Psychology of the Unconscious"; 6. The Flight Into the Unconscious: C.G. Jung's Psychology Project; 7. Liber Novus, that is, The New Bible: A First Analysis of C.G. Jung's Red Book; 8. The Opposition of 'Individual' and 'Collective' - Psychology's Basic Fault: Reflections on Today's Magnum Opus of the Soul; 9. Closure and Setting Free or the Bottled Spirit of Alchemy and Psychology; 10. Mythic Ilusory Appearance - Blindness to Logical Form: C.G. Jung's Faust Interpretation, for Instance; Index

Wolfgang Giegerich is a Jungian analyst, now living in Berlin, and the author of numerous books, among them What Is Soul? and Neurosis: The Logic of a Metaphysical Illness. Giegerich’s Collected English Papers include The Neurosis of Psychology (Vol. I). Technology and the Soul (Vol. 2), Soul-Violence (Vol. 3), The Soul Always Thinks (Vol. 4), The Flight into the Unconscious (Vol. 5), and Dreaming the Myth Onwards (Vol. 6) (all Routledge).

The Collected English Papers of Wolfgang Giegerich makes the work of one of archetypal psychology’s most brilliant theorists available in one place. A practicing Jungian analyst and a long-time contributor to the field, Giegerich is renowned for his dedication to the substance of Jungian thought and for his unparalleled ability to think it through with both rigor and speculative strength. The product of over three decades of critical reflection, Giegerich’s English papers are collected in six volumes: The Neurosis of Psychology (Vol. I). Technology and the Soul (Vol. 2), Soul-Violence (Vol. 3), and The Soul Always Thinks (Vol. 4), The Flight into the Unconscious (Vol. 5), and Dreaming the Myth Onwards (Vol. 6).