The Focal Press Companion to the Constructed Image in Contemporary Photography 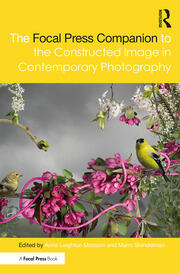 The Focal Press Companion to the Constructed Image in Contemporary Photography

This compendium examines the choices, construction, inclusions and exemptions, and expanded practices involved in the process of creating a photograph. Focusing on work created in the past twenty-five years, this volume is divided into sections that address a separate means of creating photographs as careful constructs: Directing Spaces, Constructing Places, Performing Space, Building Images, and Camera-less Images. Introduced by both a curator and a scholar, each section features contemporary artists in conversation with curators, critics, gallerists, artists, and art historians. The writings include narratives by the artist, writings on their work, and examinations of studio practices. This pioneering book is the first of its kind to explore this topic beyond those artists building sets to photograph.

Introduction: The State of Photography, The Status

Antimodernism, and the Performative Photograph

Marni Shindelman’s work investigates proximity and touch in digital culture. She is half the collaborative team of Larson & Shindelman. Their ongoing project, Geolocation, uses publicly available embedded GPS information in Twitter updates to track the locations of user posts and make photographs to mark the location in the real world. She is an assistant professor at the University of Georgia, Lamar Dodd School of Art. Prior to that she taught for ten years at the University of Rochester. Her work has been in exhibitions at Crystal Bridges Museum, solo exhibitions Blue Sky in Portland, United Photo Industries in Brooklyn, the Contemporary Arts Center Las Vegas. Selections have been shown in group shows at the Light Factory in Charlotte, the FotoFestiwal in Poland, the Houston Center for Photography, Baltimore Museum of Art, the Moscow International Biennale in Russia, and Conflux Festival in NYC. Shindelman’s projects have been featured in Wired Magazine, GUP Magazine, The Picture Show from NPR, The Dish, PetaPixel, Fast Company, Gizmodo, Hyperallergic, the New York Times, Hostshoe Magazine, the Washington Post, Utne Reader, Flavorwire, Frieze Magazine, the British Journal of Photography, the BBC News Viewfinder, and on the radio program Marketplace Tech Report.

Anne Leighton Massoni is the Program Director of Photography at The University of the Arts in Philadelphia, Pennsylvania. Prior to teaching at UArts she held positions at Marshall University, Cornell University, Tyler School of Art, Washington College, Memphis College of Art, and Monmouth University. She has exhibited nationally and internationally including the H. F. Johnson Museum in New York, The Print Center in Philadelphia, The Sol Mednick Gallery in Philadelphia, NIH in Washington, DC, the Allen Sheppard Gallery in New York City, Newspace Gallery in Portland, Rayko in San Francisco, the East End Film Festival in London, England, the 2013 International Mobile Innovation Screening in New Zealand and Australia, and IlCantinonearte Teatri e Galleria del Grifo in Montepulciano, Italy. Recent publications of her work include ASPECT: The Chronicle of New Media Art and SpostaMenti, published by MuseumsEtc in England. She serves as the Vice Chair of the National Board of the Society for Photographic Education.