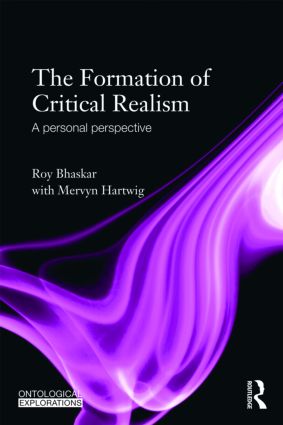 The Formation of Critical Realism

This series of interviews, conducted in the form of exchanges between Roy Bhaskar and Mervyn Hartwig, tells a riveting story of the formation and development of critical realism.

Three intersecting and interweaving narratives unfold in the course of this unfinished story: the personal narrative of Roy Bhaskar, born of an Indian father and English mother, a child of post-war Britain and Indian partition and independence; the intellectual narrative of the emergence and growth of critical realism; and a world-historical story, itself theorized by critical realism in its discussion of the development of modernity.

The informal dialogical style of The Formation of Critical Realism makes it compelling reading and an invaluable source for students of critical realism as well as all those interested in the intellectual story of our times.

That such an overview of the development of critical realism is available in one volume is worth the price alone. But what makes this book particularly attractive is its promise of interweaving three unfolding and related narratives – the personal narrative of Bhaskar, a child of post-war Britain and Indian partition and independence, the intellectual narrative of the emergence and growth of critical realism, and a ‘world-historical story’ and discussion of the development of modernity.'

'…I found this book to be most inspiring in the sense that it revealed Bhaskar’s (albeit fallible) commitment to ‘walk the talk’, his search for wholeness and ‘unity of theory and practice’, as first mentioned in the opening chapter. There are many examples of this throughout the book, including his early political activism, exploratory practice with psychoanalysis, meditation and other spiritual practices. Though the book sets out to discuss the formation of the philosophy of critical realism, I think it achieves much more than this. We see how critical realism is (or has the potential to be) a lived practice.'

Mervyn Hartwig is a leading commentator on critical realism, and the editor of and principal contributor to the recently published Dictionary of Critical Realism.