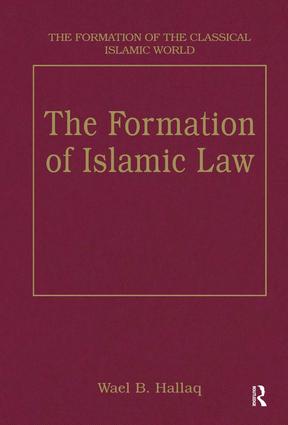 The Formation of Islamic Law

Edited by Wael B. Hallaq

The fourteen studies included in this volume have been chosen to serve several purposes simultaneously. At a basic level, they aim to provide a general - if not wholly systematic - coverage of the emergence and evolution of law during the first three and a half centuries of Islam. On another level, they reflect the different and, at times, widely divergent scholarly approaches to this subject matter. These two levels combined will offer a useful account of the rise of Islamic law not only for students in this field but also for Islamicists who are not specialists in matters of law, comparative legal historians, and others. At the same time, however, and as the Introduction to the work argues, this collection of distinguished contributions illustrates both the achievements and the shortcomings of paradigmatic scholarship on the formative period of Islamic law.

Contents: General editor's preface; Introduction; The Arab conquests and the formation of Islamic society, I. M. Lapidus; Pre-Islamic background and early development of jurisprudence, Joseph Schacht; Foreign elements in ancient Islamic law, Joseph Schacht; The birth-hour of Muslim law?: an essay in Exegesis, S.D. Goitein; Two legal problems bearing on the early history of the Qur’an, Patricia Crone; Unconditional manumission of slaves in early Islamic law: a hadith analysis, Ulrike Mitter; The role of non-Arab converts in the development of early Islamic law, Harald Motzki; The judiciary (Qadis) as a governmental-administrative tool in early Islam, Irit Abramski-Bligh; Islamic juristic terminology before Safi’i: a semantic analysis with special reference to Kufa, Zafar Ishaq Ansari; Was al-Shafi’i the master architect of Islamic jurisprudence?, Wael Hallaq; Muhammad b. Da’ud al-Zahiri's Manual of Jurisprudence, al-Wusul ila Ma’rifat al-Usul, Devin Stewart; Early Ijtihad and the later construction of authority, Wael Hallaq; The formation of the Sunni schools of law, Christopher Melchert; The Caliphs, the 'Ulama', and the law: defining the role and function of the Caliph in the early ’Abbasid Period, Muhammad Qasim Zaman; Index.

Wael B. Hallaq is Professor of Islamic Law in the Institute of Islamic Studies, McGill University, Canada