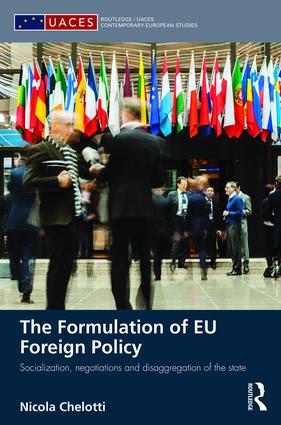 Socialization, negotiations and disaggregation of the state, 1st Edition

EU foreign and defence policy is largely formulated in the working parties and committees of the Council of the EU and the vast majority of decisions in this field are made by the national diplomats working in the around 35 groups of the CFSP/CSDP.

Although the importance of these committees and their participants has been increasingly recognised, we still know relatively little about them. Using an original database of 138 questionnaires and 37 interviews, this book addresses this lack of knowledge, studying what these committees do and how they negotiate and resolve issues. It explores three key areas:

In doing so, it provides an innovative observation point from which EU foreign policy can be analysed.

This book will be of key interest to scholars and students of EU foreign and defence policy, external relations of the EU, European integration and politics, diplomacy and more broadly international relations.

'EU foreign policy has always been a secretive, elite-driven phenomenon, and many scholars have suggested that these officials have their own unique working methods to build consensus in the face of competing national perspectives. Yet until now we have lacked a comprehensive study of these processes, their relationship to national positions, and their impact on the international role of the EU. The Formulation of EU Foreign Policy admirably fills that gap, and is a very welcome addition to the literature.' - Prof. M.E. Smith, University of Aberdeen, UK.

Nicola Chelotti is LSE Fellow in the Department of International Relations at the London School of Economics and Political Science, UK.