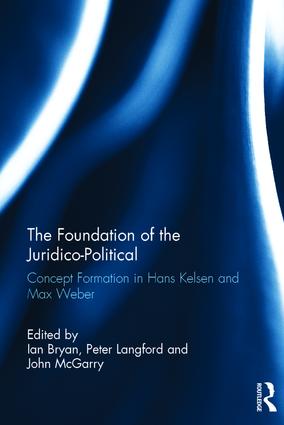 The Foundation of the Juridico-Political

Hans Kelsen and Max Weber are conventionally understood as initiators not only of two distinct and opposing processes of concept formation, but also of two discrete and contrasting theoretical frameworks for the study of law. The Foundation of the Juridical-Political: Concept Formation in Hans Kelsen and Max Weber places the conventional understanding of the theoretical relationship between the work of Kelsen and Weber into question. Focusing on the theoretical foundations of Kelsen’s legal positivism and Weber’s sociology of law, and guided by the conceptual frame of the juridico-political, the contributors to this interdisciplinary volume explore convergences and divergences in the approach and stance of Kelsen and Weber to law, the State, political science, modernity, legal rationality, legal theory, sociology of law, authority, legitimacy and legality. The chapters comprising The Foundation of the Juridical-Political uncover complexities within as well as between the theoretical and methodological principles of Kelsen and Weber and, thereby, challenge the enduring division between legal positivism and the sociology of law in contemporary discourse.

Introduction: Convergence and Divergence, Peter Langford, Ian Bryan And John Mcgarry Part 1: Kelsen, Weber and Neo-Kantianism 1. Between Weber and Kelsen: The Rebirth of Philosophy of Law in German-Speaking Countries and Conceptions of the World, Agostino Carrino 2. Hans Kelsen And Hermann Cohen: From Theology To Law And Back, Leora Batnitzky 3. The Juridico-Political in South-West Neo-Kantianism. Methodological Reflections on its Construction, Christian Krijnen 4. The Specificity of Social Concepts. On Weber’s Neo-Kantian Reception, Arnaud Dewalque 5. Intellectual Freedom. The Gestalt of Political Philosophy in the works of Kelsen and Weber, Peter Gostmann Part 2: Kelsen and Freud 6. Intellectual affinities: Ernst Mach, Hans Kelsen, Sigmund Freud, and the Austrian anti-essentialist approach to science and scholarship, Johannes Feichtinger 7. The Individual and the State. Remarks on Kelsen’s adoption of Freud, Hans-Joachim Busch Part 3: Weber and Nietzsche 8. Max Weber as Reader of Nietzsche – Remarks on a German Discussion, Hubert Treiber 9. The Demands of Disenchantment: From Nietzsche, Weber, and Troeltsch to Bultmann, Karsten Fischer Part 4: Kelsen, Weber and the Pre-Modern 10. Max Weber's Dissertation: An Analysis (and a Comparison to his Habilitation), Lutz Kaelber 11. Kelsen, Weber: on Justice and Law, Sandro Chignola

is Reader in Law, Department of Law and Criminology, Edge Hill University, UK.