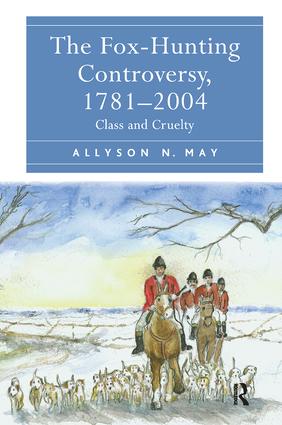 By Allyson N. May

August 1781 saw the publication of a manual on fox hunting that would become a classic of its genre. Hugely popular in its own day, Peter Beckford's Thoughts on Hunting is often cited as marking the birth of modern hunting and continues to be quoted from affectionately today by the hunting fraternity. Less stressed is the fact that its subject was immediately controversial, and that a hostile review which appeared on the heels of the manual's publication raised two criticisms of fox hunting that would be repeated over the next two centuries: fox hunting was a cruel sport and a feudal, anachronistic one at that. This study explores the attacks made on fox hunting from 1781 to the legal ban achieved in 2004, as well as assessing the reasons for its continued appeal and post-ban survival. Chapters cover debates in the areas of: class and hunting; concerns over cruelty and animal welfare; party politics; the hunt in literature; and nostalgia. By adopting a thematic approach, the author is able to draw out the wider social and cultural implications of the debates, and to explore what they tell us about national identity, social mores and social relations in modern Britain.

’This is an engaging book, a fascinating read, which combines the social and literary histories of fox hunting, from the eighteenth century to the present day. Scholars as well as the general reader will savour the subtle analysis of class and other social relationships, of the place of the pony in children’s literature, and the astute judgments about the surprisingly widespread references to the hunt in recent as well as older literary works.’ Douglas Hay, York University, Canada 'Fox hunting is, as May makes clear, an emotive subject, and her balanced and thoughtful approach may not appeal to readers with strong views on either side of the debate, but it offers an overview of the cultural, social and literary history of the debate, while at the same time giving an insight into the two key questions: why hunting has held such an enduring place in the lives of its supporters and why it has aroused such controversy in Britain.' Sport in History 'Allyson N. May’s The Fox-Hunting Controversy, 1781-2004 … demonstrates the sport’s complex and ever-changing place in English culture, making the implications of the ban more multifaceted and far-reaching than might at first appear.' Times Literary Supplement ’…an interesting set of essays likely to provoke more argument and encourage others to pursue the same subject.’ English Historical Review

Contents: Introduction; The field; ’The cricket of savages’?: class and cruelty; ’Come hup! I say, you hugly beast!’: the hunt in literature; Labour and the fox; The flight from modernity: nostalgia and the hunt; Conclusion; Bibliography; Index.

Allyson N. May is Associate Professor in the Department of History at The University of Western Ontario, Canada.