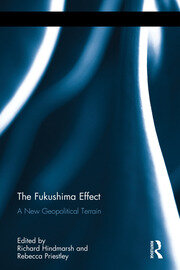 The Fukushima Effect offers a range of scholarly perspectives on the international effect of the Fukushima Daiichi nuclear meltdown four years out from the disaster. Grounded in the field of science, technology and society (STS) studies, a leading cast of international scholars from the Asia-Pacific, Europe, and the United States examine the extent and scope of the Fukushima effect. The authors each focus on one country or group of countries, and pay particular attention to national histories, debates and policy responses on nuclear power development covering such topics as safety of nuclear energy, radiation risk, nuclear waste management, development of nuclear energy, anti-nuclear protest movements, nuclear power representations, and media representations of the effect. The countries featured include well established ‘nuclear nations’, emergent nuclear nations and non-nuclear nations to offer a range of contrasting perspectives.

Richard Hindmarsh is Associate Professor in Griffith University’s School of Environment, and Centre for Governance and Public Policy where his research lies in environmental politics and policy, and science, technology and society. He holds a PhD in STS from Griffith University (Australia) and his previous book on this topic is Nuclear Disaster at Fukushima Daiichi: Social, Political and Environmental Issues (Routledge 2013).

Rebecca Priestley is Senior Lecturer in the Science and Society group at Victoria University of Wellington (New Zealand) where her research covers science communication and history of science. She holds a PhD in HPS from the University of Canterbury and her most recent book was Mad on Radium: New Zealand in the Atomic Age (Auckland University Press 2012).

'This excellent edited volume on the consequences of the Fukushima Dai-ichi nuclear power plant meltdowns in Japan comes exactly at the right time: when people are being exposed to tremendous misinformation on the subject and when decision makers seek to weigh the lessons learned from the ongoing disaster. Based in the field of science, technology and society, this explicitly comparative book provides insights into how and to what extent a natural-technological disaster has had an impact around the world on energy source development and management. Observers wondering why some countries moved away from nuclear power following the disasters while others kept their atomic energy programs will find this critical reading.'—Daniel P. Aldrich, author of Site Fights and Building Resilience

'Within the work’s 14 chapters, the editors Hindmarsh (Griffith Univ., Australia) and Priestley (Victoria Univ. of Wellington, New Zealand) have assembled a vast variety of contributions from authors whose expertise ranges across the social sciences, science, and technology. The individual chapters cover the effects of the Fukushima disaster on countries including Japan, Taiwan, Korea, China, India, Russia, Finland, Germany, Switzerland, France, the United States, and New Zealand. The editors maintain that the Fukushima disaster caused some countries to completely phase out nuclear power and other countries to not embrace nuclear power at all. The contributions within this book mainly treat the effects of Fukushima on nuclear power development, management, and policy; however, there is wide variation in the treatment of the diverse responses by nations. This book will be of interest to individuals involved in public policy, energy policy, risk planning, and public opinion, as related to the Fukushima disaster.  Summing Up: Recommended. Researchers and faculty; professionals.' - A. M. Strauss, Vanderbilt University, CHOICE