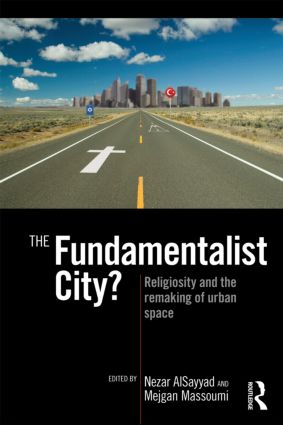 Religiosity and the Remaking of Urban Space, 1st Edition

The relationship between urbanism and fundamentalism is a very complex one. This book explores how the dynamics of different forms of religious fundamentalisms are produced, represented, and practiced in the city. It attempts to establish a relationship between two important phenomena: the historic transition of the majority of the world’s population from a rural to an urban existence; and the robust resurgence of religion as a major force in the shaping of contemporary life in many parts of the world.

Employing a transnational interrogation anchored in specific geographic regions, the contributors to this volume explore the intellectual and practical challenges posed by fundamentalist groups, movements, and organizations. They focus on how certain ultra religious practices of Christianity, Hinduism, Islam, and Judaism have contributed to the remaking of global urban space. Their work suggests that it is a grave oversimplification to view religious orthodoxies or doctrines as the main cause of urban terrorism or violence. Instead they argue that such phenomena should be understood as a particular manifestation of modernity’s struggles.

Nezar AlSayyad and Mejgan Massoumi’s book provides fascinating reading for those interested in religion and the city, with thought provoking pieces from experts in anthropology, geography sociology, religious studies, and urban studies.

'In the spirit of resilient exegesis at its best, The Fundamentalist City? mirrors the efforts of most urban residents to locate and use the resourcefulness of city life. In doing so, it seeks to urgently understand how certain residents exude so much faith in their convictions as to deem it nearly impossible to live with others pursuing different paths. In cities where all imaginations may be possible, when does the city come to reflect one dominant imagination, and when does it keep all of them in play?'- AbdouMaliq Simone, Dept of Sociology, Goldsmiths College, University of London, UK

'New religious movements are often explained as a response to the challenges of modern urban life. But can religious practice, in turn, transform the city? These essays offer a rich variety of imaginative and insightful explorations of this novel and important question.' - Timothy Mitchell, Professor of Arab Studies, Columbia University, USA

'Modern studies of the city have made much of secularization, and while there has been a quickening of interest in the new role of religion in cities few scholars have ventured onto the much more fraught terrain of religious fundamentalisms with the cross-cultural range and analytic depth of the contributors to this timely volume. The product of a genuinely collaborative project, The Fundamentalist City does not plane away the differences between the contributors but brings them into creative tension to illuminate the cultural and political consequences of different religious fundamentalisms. As provocative as it is sensitive, the result is a compelling account of the intimate connections between fundamentalism, exclusion and the city'- Derek Gregory, Dept of Geography, University of British Columbia, Canada

'From innovative theoretical essays to case studies of communitarian spatial practices in industrial and developing states, editors Nezar AlSayyad and Mejgan Massoumi have composed a valuable anthology of articles on urban formations, faith and subjectives across traditions… This powerful anthology fills many lacunae and should be required reading in a number of disciplines for some time to come.' - David Simonowitz, International Journal of Islamic Architecture

'[T]his book provides both a timely contribution to the literature on how urban space is constructed and shaped by religious belief and faith. But it also in its own terms represents a challenge to that thinking which perceives religious fundamentalism as a danger and a threat to our freedoms within cities.' – International Planning Studies, Brian Simpson, University of New England, Australia

Part 1: Fundamentalisms: Between City and Nation The Fundamentalist City? Nezar AlSayyad Why in the City? Explaining Urban Fundamentalism Inger Furseth The Civility of Inegalitarian Citizenships James Holston Part 2: Fundamentalisms and Urbanism American National Identity, the Rise of the Modern City, and the Birth of Protestant Fundamentalism Rhys Williams Producing and Contesting the "Communalized City": Hindutva Politics and Urban Space in Ahmedabad, India Renu Desai On Religiosity and Spatiality: Lessons from Hezbollah in Beirut Mona Harb Hamas in Gaza Refugee Camps: The Construction of Trapped Spaces for the Survival of Fundamentalism Francesca Giovannini Part 3: Identity, Tradition, and Fundamentalisms Abraham’s Urban Footsteps: Political Geography and Religious Radicalism in Israel/Palestine Oren Yiftachel and Batya Roded Fundamentalism at the Urban Frontier: the Taliban in Peshawar Mejgan Massoumi Taking the (Inner) City for God: Ambiguities of Urban Social Engagement among Conservative White Evangelicals Omri Elisha Postsecular Urbanisms: Situating Delhi within the Rhetorical Landscape of Hindutva Mrinalini Rajagopalan Excluding and Including the "Other" in the Global City: Religious Mission among Muslim and Catholic Migrants in London John Eade

Nezar AlSayyad is Professor of Architecture, Planning, and Urban History and Chair of the Center for Middle Eastern Studies at the University of California, Berkeley. He is also President of the International Association for the Study of Traditional Environments. He has published fourteen books including Muslim Europe or Euro-Islam (2002); Urban Informality (2004); The End of Tradition? (2005); and Cinematic Urbanism (2006).