The Future of Newspapers 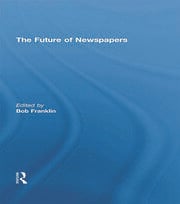 The Future of Newspapers

The future of newspapers is hotly contested. Pessimistic pundits predict their imminent demise while others envisage a new era of participatory journalism online, with yet others advocating increased investment "in quality journalism" rather than free gifts and DVDs, as the necessary cure for the current parlous state of newspapers.

Globally, newspapers confront highly variable prospects reflecting their location in different market sectors, countries and journalism cultures. But despite this diversity, they face similar challenges in responding to the increased competition from expansive radio and 24 hour television news channels; the emergence of free "Metro" papers; the delivery of news services on billboards, pod casts and mobile telephony; the development of online editions, as well as the burgeoning of blogs, citizen journalists and User Generated Content. Newspapers’ revenue streams are also under attack as advertising increasingly migrates online.

This authoritative collection of research based essays by distinguished scholars and journalists from around the globe, brings together a judicious mix of academic expertise and professional journalistic experience to analyse and report on the future of newspapers.

This book was published as special issues of Journalism Practice and Journalism Studies.

Editorial: The Future of Newspapers  1. The Curse of Introversion  2. The Future of Newspapers: Historical Perspectives  3. Mapping Professional Imagination: On the Potential of Professional Culture in the Newspapers of the Future  4. "The Supremacy of Ignorance over Instruction and of Numbers over Knowledge": Journalism, Popular Culture and the English Constitution  5. Newspapers go for Advertising! Challenges and Opportunities in a Changing Media Environment  6. Shifts in Newspaper Advertising Expenditures and their Implications for the Future of Newspapers  7. (No) News on the World Wide Web? A comparative content analysis of online news in Europe and the US  8. How Citizens Create News Stories: The "News Access" Problem Reversed  9. Deliberativeness of Online Political Discussion: a Content Analysis of the Guangzhou Daily Website  10. The Consumer as Producer – of What? User-generated Tabloid Content in The Sun (UK) and Aftonbladet (Sweden)  11. Attack of the Killer Newspapers! The ‘Tabloid Revolution’ in South Africa and the Future of Newspapers  12. The History of a Surviving Species: Defining Eras in the Evolution of Foreign Correspondence  13. International News from Paris- and London-based Agency News-rooms  14. What Future for Local News? The Crisis of the French Regional Daily Press  15. Participatory Journalism Practices in the Media and Beyond: An International Comparative Study of Initiatives in Online Newspapers  16. A Clash of Cultures: The Integration of User-generated Content within Professional Journalistic Frameworks at British Newspaper Websites  17. Old Values, New Media: Journalism Role Perceptions in a Changing World  18. The Future of ‘Responsible Journalism’: Defamation Law, Public Debate and News Production  19. Tabloid Nouveau Genre: Format Change and News Content in Quebec City’s Le Soleil  20. Gossip, Sport And Pretty Girls: What Does ‘Trivial’ Journalism Mean to Tabloid Newspaper Readers?  21. Newspapers in Education in Flanders: A Press Policy to Support the Future Readership Market for Newspapers  22. The Simultaneous Rise and Fall of Free and Paid Newspapers in Europe  23. Obituaries for Sale: Wellspring of Cash and Unreliable Testimony  24. From Newspapers to Multimedia Group: Business Growth Strategies of the Regional Press in Spain  25. "If You Can’t Earn Enough – Teach" Newspaper Journalists as Journalism Lecturers in Israel  26. Newspaper Negotiations: The Crossroads of Community Newspaper Journalists’ Values and Labor  27. The Passive Journalist: How Sources Dominate Local News