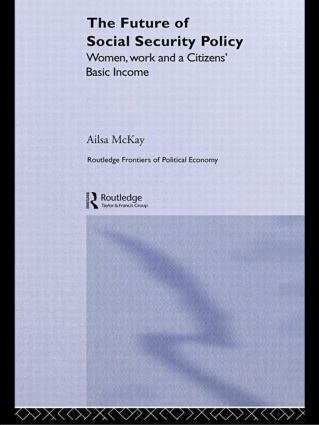 Current debates concerning the future of social security provision in advanced capitalist states have raised the issue of a citizen’s basic income (CBI) as a possible reform package: a proposal based on the principles of individuality, universality and unconditionality which would ensure a minimum income guaranteed for all members of society. Implementing a CBI, would consequently entail radical reform of existing patterns of welfare delivery and would bring into question the institutionalized relationship between work and welfare.

Ailsa McKay’s book makes a unique and positive contribution to the CBI literature by examining the proposal from a feminist economics perspective. Gender concerns are central to any debate on the future of social security policy, in that state intervention in the field of income redistribution has differential impacts on men and women. By drawing attention to the potential a CBI has in promoting equal rights of freedom for men and women this book serves to open up the debate to incorporate a more realistic and inclusive vision of the nature of modern socio-economic relationships.

'The overall purpose is to draw attention to the confining nature of mainstream economic theo-rizing in the policy process and to outline how a feminist economic perspective could contribute to the development of a more inclusive and realistic understanding of state welfare arrangements.' - International Social Security Review

'The main subject is an exploration of the Citizens Basic Income (CBI) proposal and how it presents an opportunity to reshape the future of social security provision in advanced capitalist States.' - International Social Security Review

' McKay provides an excellent overview of the gender bias of contemporary social security policy and a challenge to incorporate a feminist perspective into reform proposals that basic income advocates, as well as advocates of other approaches, would do well to meet.' Basic Income Studies