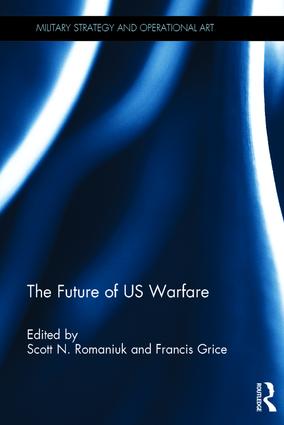 The Future of US Warfare

This book provides an interdisciplinary analysis of the future of US warfare, including its military practices and the domestic and global challenges it faces. The need to undertake a comprehensive analysis about the future of warfare for the US is more pressing today than ever before. New technologies and adversaries, both old and new, have the potential to revolutionize how wars are fought, and it is imperative that policy makers, military planners, and scholars engage with the latest analyses regarding these new threats and weapon systems. The primary aim of this book is to provide a clear and comprehensive depiction of the types of conflict that the United States is likely to become involved with in the future, as well as the methods of warfare that it may employ within these struggles. While a number of scholarly books have previously considered some of the potential features of US warfare in the future, many of these writings are either outdated or have limited their focus to just one or two of the main types of warfare that may occur and omitted consideration of the others. This book intends to remedy this deficiency in the literature. The volume consists of thematic chapters which address the key issues relevant to the future of US warfare, including cyber warfare, asymmetric conflicts, drone warfare, and nuclear strategy. Through the provision of a series of analyses by leading international academics, the volume provides an important interdisciplinary examination of the different areas of warfare that the United States is expected to use or encounter in the future.

This book will be of great interest to students of US foreign policy, military studies, strategic studies and International Relations in general.

Introduction: Lessons of the Past for Future War, Francis Grice

PART I: Strategy and Joint Warfare

5. The Moral, Physical, and Technological: Communication and the Wars of the 21st Century, John M. Callahan

6. A Three-Pronged Proposal for the Future of US counterinsurgency: Military Peace with Economic Incentives and Political Devolution, Glenn M. E. Duerr

8. The US Home Front: Drug Cartels and Security along the US-Mexico Border, Martin S. Catino

10. The US and ‘Small Footprint’ Advising in Colombia: A Model for Future Military Intervention, Jorge E. Delgado

11. The Utility of Force in Cities: Future Challenges of US Army Urban Stabilization Efforts, Antônio Sampaio

14. The Future of US Hegemony in the Middle East: US-Israel-China Military Technology Development and Acquisition, Abdelrahman Rashdan

16. The Military Effectiveness of Stealth Aircraft and US Warfare, Shih-Yueh Yang

Conclusion: Reflections on the Future of US Warfare, Scott N. Romaniuk

Scott N. Romaniuk is a PhD candidate in International Studies at the University of Trento, Italy.

The Ashgate Series on Military Strategy and Operational Art analyzes and assesses the synergistic interrelationship between joint and combined military operations, national military strategy, grand strategy, and national political objectives in peacetime, as well as during periods of armed conflict. In doing so, the series highlights how various patterns of civil-military relations, as well as styles of political and military leadership influence the outcome of armed conflicts. In addition, the series highlights both the advantages and challenges associated with the joint and combined use of military forces involved in humanitarian relief, nation building, and peacekeeping operations, as well as across the spectrum of conflict extending from limited conflicts fought for limited political objectives to total war fought for unlimited objectives. Finally, the series highlights the complexity and challenges associated with insurgency and counter-insurgency operations, as well as conventional operations and operations involving the possible use of weapons of mass destruction. Scholars and practitioners in the fields of politico-military history, international relations, and national security policy are invited to contribute to this new series as well as faculty at senior and intermediate level service schools involved in professional military education.