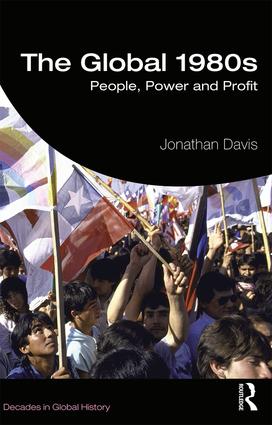 The Global 1980s takes an international perspective on the upheaval across the world during the long 1980s (1979–1991) with the end of the Cold War, a move towards a free-market economic system, and the increasing connectedness of the world.

The 1980s was a decade of unimaginable change. At its start, dictatorships across the world appeared stable, the state was still seen as having a role to play in ensuring people’s well-being, and the Cold War seemed set to continue long into the future. By the end of the decade, dictatorships had fallen, globalisation was on the march and the opening of the Berlin Wall paved the way for the end of the Cold War. Divided into four chronological parts, sixteen chapters on themes including domestic politics, the global spread of democracy, international relations and global concerns including AIDS, acid rain and nuclear war, explore how world-wide change was initiated both from above and below. The book covers such topics as ideological changes in the liberal democratic west and socialist east, protests against nuclear weapons and for democratic governance, global environmental worries, and the end of apartheid in South Africa.

Offering an overview of a decade in transition, as the global order established after 1945 broke down and a new, globalised world order emerged, and supported by case studies from across the world, this truly global book is an essential resource for students and scholars of the long 1980s and the twentieth century more generally.

‘Students will welcome this compelling and comprehensive introduction to the global 1980s, a pivotal and complex period that marked above all the assault on the post-war welfare state alongside the collapse of the Soviet bloc. Davis is admirably judicious in covering the triumph of economic liberalism, as well as the major pockets of resistance and counter culture. As we continue to grapple with the heritage of the long 1980s, this book has particular relevance. It is contemporary history at its very best.’

Jonathan Davis is Senior Lecturer in Russian History at Anglia Ruskin University, Cambridge. He is co-editor of Labour and the Left in the 1980s (2018) and The British Labour Party and the Wider World (2008). He also writes about Soviet history.

This series takes a fresh view of decades in history, discussing each period from a truly global perspective and interrogating the traditional trope of a decade. In asking questions about what each decade actually represents throughout the wider world and exploring the transnational connections that shaped its course, this global approach allows the reader to see the great events of each decade as intricately bound into and moulded by international forces.