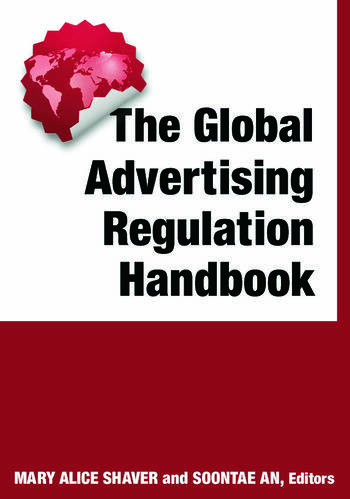 Advertising is an important and visible component of marketing, competition, and consumer awareness. As many companies grow and expand to serve multinational audiences worldwide, there is a concomitant need to understand culture, customs and regulation in the world markets. Not only businesses but consumers and students as well need to understand the workings of advertising and its regulation in worldwide markets.

This book is designed to fill this need for students and professionals. The book takes a thorough and critical view of the process in 21 countries, representing four continents of developed countries.

An important feature of this handbook is the consistent, carefully plotted format of each chapter, facilitating easy access to key information. For each country, the chapters cover the following:

Each chapter's contributing author is a known expert in advertising with a particular insight on that country's language, culture, and advertising industry.

Based on in-depth analysis, extensive interviews, and a journalist's keen insight, An Empire of Schools provides a new framework to explore the misunderstandings that have arisen between Japan and the United States. The vital determining issue that complicates U.S.-Sino communications, Cutts says, is not the cultural incompatibilities of the people or economies but the fact that all Japanese leaders emerge from the same educational treadmill or "cartels of the mind." This revered system, crowned by five national and private universities, and from which almost all Japanese leaders emerge, teaches its students that they are inherently incapable of sharing their values, civic or personal, with those of any other civilization. Describing an educational system that has been left fundamentally unchanged since the Meiji Empire, Cutts depicts the elites who graduate from the system, describes what ethical philosophy is imparted to those graduates, and warns of the dangers of nationalist elitism that arise from the system. Filled with personal anecdotes as well as critical interviews, An Empire of Schools traces the potential consequences to Japan and the Pacific Rim of an educational system that begins imparting an elitist doctrine in kindergarten that extends to the highest levels of Japanese government.