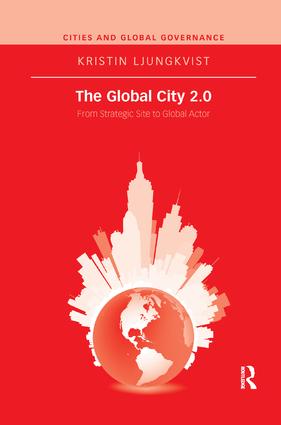 Global cities all over the world are taking on new roles as they increasingly participate directly and independently in international affairs and global politics. So far, surprisingly few studies have analyzed the role of the Global City beyond its already well explicated role in the globalized economy. How is it that local governments of Global Cities claim international political authority and develop what appears to be their own independent foreign and security policies despite the fact that such policy areas have traditionally been considered to be the core function of nation-states and central governments? What does it mean to be and to govern the contemporary Global City?

In this book Kristin Ljungkvist claims that we can better understand why local governments find it to be in their Global City’s interest to claim international political authority by exploring how the city’s role in the globalized world is constructed and narrated locally. A core claim is that Global City-hood as a specific type of collective identity can play a constitutive part in such interest formation. Combining insights from International Relations and Urban Studies scholarship, and with the help of a case study on New York City, Ljungkvist develops a new analytical framework for studying the Global City as an international political actor.

The Global City 2.0 shows that even as the Global City engages in various global issues such as global environmental governance or counterterrorism, such pursuit will be framed and rationalized in terms of the city’s economic growth. The quest for growth and global competitiveness are not necessarily the only available meanings attached to the being and governing of the contemporary Global City. However, there seems to be a remarkable persistency and attraction in economistic ideas and an economistic conception of the Global City.

"This book is a major and original contribution to global city analysis. It is the best and most exhaustive treatment of global cities as political actors in a space that goes well beyond the national."—Saskia Sassen, Columbia University, author of Expulsions

Kristin Ljungkvist is a junior lecturer at the Department of Government and Institute for Housing and Urban Research at Uppsala University, Sweden. Her current research interests include global cities and urban politics, security governance, globalization, gender and International Relations, European security and Critical Infrastructure Protection.

Scholarly concern over the role of cities as sites for global governance and the organization of global activities has increased substantially over the past 25 years. The partial denationalization of global politics has been accompanied by the increasing importance of non-state and sub-national state actors, including municipal governments. It has further resulted in the rising significance of cities as sites in and for global governance. Cities serve as platforms for scale-jumping—the movement of organizations and issues across scalar boundaries—locales for networking, and sites for the convergence of disparate global ideologies. Global actors, by concentrating in cities, take advantage of propinquity and the dense networks available in the urban landscape to organize their activities, and in doing so, also establish certain cities as "nodes" in their global networks. At the same time, global ideologies are expressed in urban landscapes and global politics takes concrete form in cities.

Because of these developments, scholars of global affairs have expressed increasing interest in the presence and influence of the city in global governance. This series will feature unique perspectives on theoretical and empirical issues in the relationship between cities and global governance. The series will serve as a platform to theorize previously undertheorized aspects of the relationship, to challenge conventional wisdom in the field, and to offer new empirical analysis of the role of cities as sites and actors in global governance as well as the role of global governance on the ground in cities. Each volume will make a distinct contribution to one or more of these questions. Volumes may take various conceptual and methodological approaches. Some will study cases, others will examine networks; some will have a regional focus, others will have a global focus; some will be focused on cities as they intersect with particular issues in global governance.

Possible topics include, but are not limited to, the following: